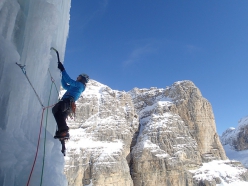 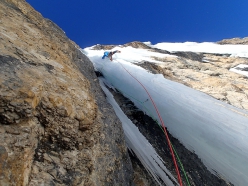 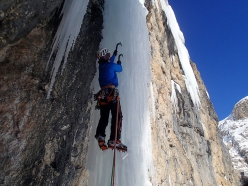 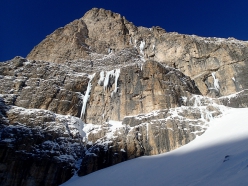 In Val Lasties, Sella, Dolomites, Santiago Padrós and Diego Toigo have repeated the icefall Solo per un altro Hashtag avoiding the first mixed pitch. This is perhaps the first time that this pearl of the Dolomites has been climbed entirely on ice.

Solo per un altro Hashtag, the spectacular mixed climb high up in Val Lasties to the right of Freit dl Mond and established in 2018 by Johannes Egger, Jörg Niedermayr and Friedl Brancalion, was repeated the other day by Santiago Padrós and Diego Toigo. The duo made an early-season ascent and, interestingly, made what is likely to be the first integral ascent of the drip as this had formed all the way down to the ledge, enabling Padrós and Toigo to avoid the M5+ section on rock which was accidentally retrobolted four days after the first ascent by Roberto Parolari and Andrea Reboldi. The Spanish mountain guide and Val di Zoldo resident provides the following report

After skiing around the Sella pass for a bit, far away in the distance I spotted the first sliver of ice this autumn. I did a bit of research and then checked out the recent Alpine Ice 2 guidebook, but something wasn’t quite right.

From a distance I made out that the drip had perhaps formed all the way to the lede, yet the description noted that the first pitch of "Solo per una Hastag" was M5 +. My fanatic, always-keen climbing parter Diego Toigo was up for it and we set off on Wednesday 4 December and skinned up Val Lasties for 2 hours to reach the base of the the climb.

The drip actually reached the ground. We climb the first easy slope, below the looming ice, up to the central ledge. From here nature unveiled herself in all her beauty with this huge icy drip, wow! Beautiful and delicate, nevertheless formed sufficiently, it didn’t vibrate as we placed our axes and to wasn’t even too difficult, even if we managed to place the first good screw quite a way off the deck. We clipped the bolt that wasn’t covered in ice for added pro, then climbed onto the outside of the drip past some cauliflower ice to reach the first belay 25m from the base. Diego climbed the the second pitch out of the niche, an elegant lead, shower included, that after another 30 meters led us to the bolted belays.

The climb receives the sun from 9 to 11, for us it was pure pleasure.

Have fun, play if safe