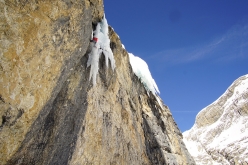 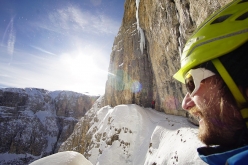 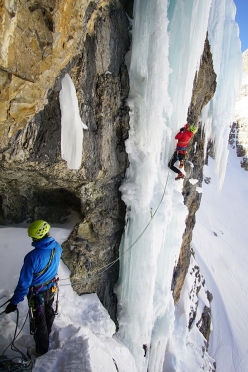 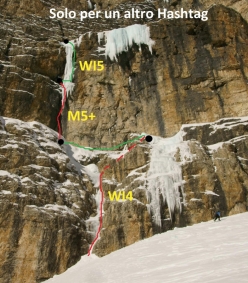 Ice climbing in the Dolomites: Johannes Egger reports about the first ascent of Solo per un altro Hashtag, a new mixed climb in Val Lasties, Sella massif, first ascended on 27/01/2018 with Jörg Niedermayr and Friedl Brancalion.

Even the night before, while preparing my equipment, my backpack seems particularly heavy. At the start of the route we rack up the crazy amount of gear and I start to understand why. Today there are three of us, Jörg, Friedl and myself. Standing below the climb, baking in the sun. We’re not in a rush, on the contrary, we’re waiting for the sun to shift off the daggers that hang menacingly along the line of rock and ice that is object of our dirtiest dreams. This is our first ever attempt at establishing a new route and we feel a bit like that first time: determined but also somewhat insecure.

About a year ago a photo of Freit dl mond caught my attention and I noticed a second, obvious line to the left. Last week I repeated Casiopeo with Jörg and, using this opportunity to take a closer look, I realised that a majestic drip had formed this year. We had to seize the moment: I sounded the alarm and the team formed. Armed to our teeth, we set off.

Jörg gears up and launches into the first pitch. This follows a gully filled with snow and ice and leads to the first belay of Freit dl Mond. Here I take the lead, gear up with rock pro and start traversing leftwards to reach the base of the corner. A corner in which a peg sparkles. I can see it clearly now. Two meters above me, metallic gray, sparkling and unwelcome. It indicates that someone else has been here before! Despair.

The line, however, seems beautiful. And anyway, wep're up here now, so what else should we do? I set off, clip the peg and continue up the corner. The rockis friable at first and the gear offers not much more than psychological support should I fall. I begin to get nervous. As I gain height however the quality of the rock improves and then I manage to place my first piece of decent gear. My legs stopp trembling. I reach the top of the corner, step left to avoid the last roof and dig my axes deep into the ice. I then move back right, tiptoe carefully up a drip for a few meters and reach a sort of grotto, perhaps more akin to a ledge than a cave; in any case it's an ideal place for the next belay.

I then set off up the next pitch, climb to the right of the ice column next to our belay, then climb up its side. A fantastic ice pitch with some extremely exposed climbing that leads to the end of the route. I belay on the final icy overlap and prepare the descent.

Back at home, only a few calls are needed to find out who had placed the mysterious peg. The line had been attempted by a young local who had rappelled off the first belay due to bad weather. Happy with this news, we then spent the next days preparing the route topo, but this proved to be old even before it was published. A mere four days later the route was repeated by a duo who bolted the mixed pitch. Seven bolts that altere the character of the climb. The only consolation: now it’s a beautiful climb that many can repeat.

As to the name: even in the alpinism the digital age has come into force. And even if we mountaineers are perhaps less enthusiastic than others at embracing change, we too check our phones for the weather forecast, for route conditions, for repeats or reports of new routes. This is itself is no mean task. And nowadays if you don’t check whether where you want to climb has already been mentioned in a forum, then you have to expect hordes of other climbers. Non solo per un Hashtag, "Not merely for a hashtag" is a criticism aimed at the modern mountaineer. Towards those who one can’t be sure whether they climb for themselves, or whether its to update their accounts on Facebook, Twitter and what not. Those alpinists who, through their wish to appear or because every now and then they receives a cap or a t-shirt, post hundreds and hundreds of photos. Photos that, once upon a time, were something special but that are now part of every day life. Mountaineers one could easily dub: hashtag.