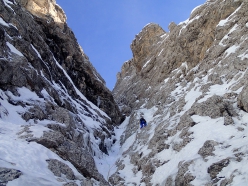 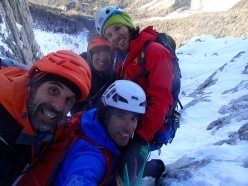 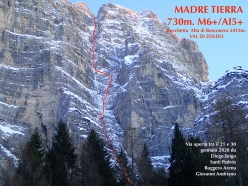 Spanish mountain guide Santiago Padrós reports about a big new winter climb up Rocchetta Alta di Bosconero (2412m) in the Zoldo Dolomites, established on 30/01/2020 with Diego Toigo. The mixed outing is called Madre Tierra and was completed after a failed first attempt with Giovanni Andriano and Ruggero Arena.

After having made the first integral ascent of Solo per un altro Hashtag in Val Lasties at the start of the winter season, Santiago Padrós and Diego Toigo have now forged an impressive new route up the northwest face of Rocchetta Alta di Bosconero in the heart of the Zoldo Dolomites. Their mixed outing, called Madre Tierra, measures over 700 meters in height and came about after a failed attempt the week beforehand with Giovanni Andriano and Ruggero Arena. The route partially follows the Canali-Camini summer climb established on 19/08/1926 by Valentino Angelini, Giovanni Angelini and Diego Tomassi, and then continue directly upwards following a logical winter line. This is likely to be the first time this portion of the mountain has been ascended as a winter climb.

On 21 January Diego Toigo, Giovanni Andriano and Ruggero Arena and I tucked into the gully to attempt the climb, but immediately realised that things were complicated and that a different strategy was needed. After 4 psychologically demanding pitches, marked by long runouts, a couple of falls and lots of excitement, we bailed.

The good weather continued and our wish to give it another go too strong, so precisely a week later, early on 30 January, Diego and I got out of the car at 6am roaring to go, knowing that the day ahead of us was going to be a long one.

We retraced our steps up the approach in an hour and a half as we watched the sun rise splendidly onto the east face of Mt. Civetta. If as the saying goes, the early bird catches the worm, then conditions were going to be excellent!

At around 8 o'clock we started up the pitches we’d climbed the previous week. This time we were much faster than on our first attempt, thanks in part to the pegs left in-situ on the most difficult sections. Nevertheless the first five pitches remained the most difficult, with difficulties up to M6+ and AI5. Psychologically they were the most demanding due to the difficulty of finding gear, the vertical sections devoid of ice and the loose snow where our ice axes had no purchase. There were some unexpected falls, too.

After pitch five the route traversed leftwards, the difficulties eased up and we entered a series of beautiful gullies that led to the col and the end of the route. having said that, although this second section was clearly much easier than the first, some parts in the chimneys were anything but trivial!

At around 5pm we finally reached the col, just in time to watch the wonderful sunset make all the surrounding mountains come ablaze. It goes without saying that we were overjoyed to have established this alpineesque, patagoniaesque style route in the heart of the Dolomites.

On 2 February Mirco Grasso and Matteo Furlan repeated the route, confirming the grade, the great climbing and the time needed to repeat our climb.

MADRE TIERRA is dedicated to the uniqueness of Patagonia, to mother earth, to Monica Campo and to my mother.

17.07.2018
Ciao Monica
Two days ago Monica Campo Bagatin passed away. For over 35 years she ran the hut Rifugio Casèra Bosconero in Val di Zoldo, Dolomites and she was the first woman to join the Val Zoldana mountain rescue squad. On 28 July she would have received at Rocca Pietore the Pelmo d'Oro 2018 Special Mention for her hospitality in the mountains. Francesca Colesanti recalls this unique, unforgettable woman.