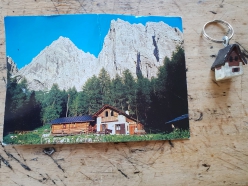 Two days ago Monica Campo Bagatin passed away. For over 35 years she ran the hut Rifugio Casèra Bosconero in Val di Zoldo, Dolomites and she was the first woman to join the Val Zoldana mountain rescue squad. On 28 July she would have received at Rocca Pietore the Pelmo d'Oro 2018 Special Mention for her hospitality in the mountains. Francesca Colesanti recalls this unique, unforgettable woman.

Monica. I met you in 1989, our paths crossed as we made our way up to your hut: you scrambled ahead quickly, your son safely on shoulders. Our rucksacks on the other hand were laden with gear to climb Via Strobel: we ascended slowly and less gracefully. I’d never been to the Casera hut before and on reaching the clearing I remember that feeling of immense peace, of an idyll. You were busying away and quickly told us where we could stay. A glance was all that was needed to create an inner understanding, to make us feel at home. There weren’t many people in the hut and so, later on, we managed to chat and get to know each other a bit: we were both more or less the same age, but from two very different worlds. I, a Roman tourist up in the mountains, you, born and bred in the mountains, at home up there, already a mother marked by an overwhelming enthusiasm, determined to transform "your" hut which, back then, was little more than a handful of wooden boards nailed together, into your own little paradise. I don’t remember what else we talked about, naturally, too many years have passed by since then. And I can’t even recall what we talked about when I made my way up “to your house” on other occasions. All I know is that, throughout my life, I have often stopped to think about you and the decision you made that I, too, would have loved to dare to make, had I not lacked the courage. One day, many years later, a friend who’d just been to your hut gave me an envelope and said: "This is for you, from Monica". You’d sent me a postcard of your refuge with Rocchetta in the background, wished me warmest greetings and also gave me a little wooden keyring that I’ve guarded jealously ever since. Then the years passed by. A few days ago I talked to my daughter about which mountains we should visit in late July. You won’t believe it, but I suggested Val di Zoldo and I talked about you, telling my daughter about who you were and what you did: "I haven’t seen her decades - I said - I’d love to pay her a visit, I’ve been thinking about doing this for such a long time.” Unfortunately though time ran out: two days ago, while asking a friend about easy climbs nearby, I learnt that you’d passed away, that very same morning. It felt like a slap in the face. Violent. But I’ll come anyway, Monica, and I’m certain I’ll meet you up there in that clearing, that I’ll recognise your look in the eyes of your son and your brother. I’d nevertheless like my daughter to get to your your path, your trees, your rooms, and to breathe in the scent of that green meadow.

The Jury attributes the Pelmo d'Oro 2018 Special Mention to Monica Campo Bagatin
A perfect example of conduct in the mountains, an alpinist and mother, Monica Campo Bagatin has managed to transmit the profound love for the mountains around Rifugio Bosconero, run by her ever since it was built over thirty-five years ago. The hospitality and serenity that she has always managed to convey, despite the difficulties of running the hut, have made Rifugio Bosconero one of the most loved places by valley locals and mountaineers, who use this hut not only as an ideal base for beautiful walks and demanding climbs, but also as a ”soulful” refuge from the chaos of the modern world.