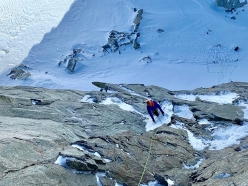 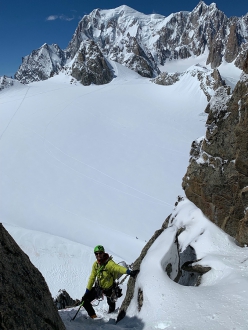 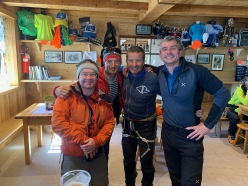 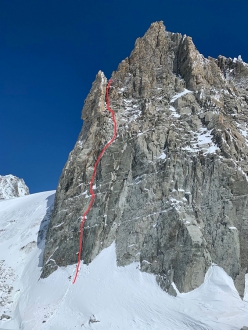 At the end of April I teamed up with Luigi Santini, a good friend of mine. We wanted to climb something special because Luigi was about to leave for Alaska and he wanted some altitude training. As we got into the cable car I happened to meet a colleague, English mountain guide Jon Bracey, who was with a client, too. We got chatting and the idea came up of doing something together. I knew about something on Aiguilles Marbrées, an obvious unclimbed line, perhaps even the last big route waiting to be climbed on this peak, so we arranged to meet the next day and attempt it together.

The route we climbed is very logical and climbs up the left-hand side of the peak, a few meters to the right of a summer rock route equipped with pegs. We followed a series of frozen corners to reach the couloir up high. To tell the truth the initial idea was different, but after three pitches it became so obvious how to continue in order to reach the breche that we decided to follow the most natural line of weakness.

The rock quality is quite good and we ascended without resorting to bolts. However, as we abseiled we added bolts to all the belays for the rappels and also some bolts on the actual pitches. Why did we retro-bolt Mtbness? Over the years I’ve come to the conclusione that if climbs like this one - which are situated so close to the Torino hut - have bolted belays, then it’s definitely bettie as they offer some tranquility to those who go and repeat them. I can assure you that climbing M6 grade in an ambient like this one will put anyone under pressure, and for those who want to try dry tooling up in the mountains, well... I reckon this is a great opportunity!

P.S. As we climbed the route we saw a possible exit to the right. Maybe there is still is something new to be done on Marbrées after all!

07.10.2016
For Gérard Ottavio and Joel Déanoz
On 6 October 2016 Gérard Ottavio, president of the Matterhorn Alpine Guides, and Joel Déanoz, director of the Breuil-Cervinia ski school, fell to their deaths on the South Face of the Matterhorn during an attempt to repeat the difficult and demanding Deffeyes - Carrel route. Their deaths are an immense loss for Cervinia and for the entire Italian mountaineering community. Hervé Barmasse remembers his friends.