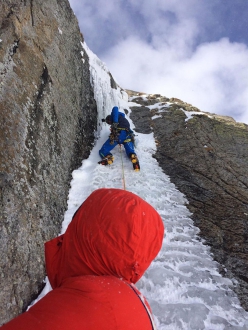 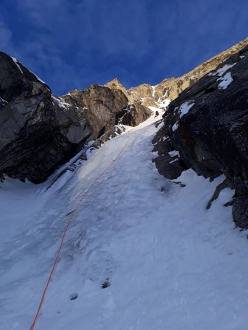 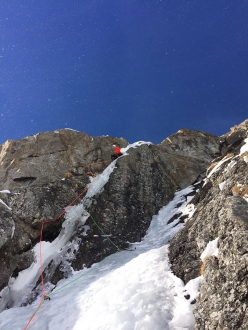 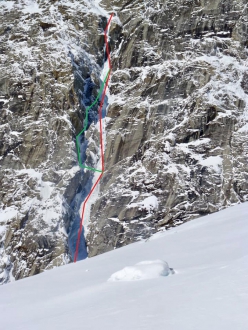 Denis Trento reports about a new winter climb up the east face of Aiguille Rouges de Rochefort in the Mont Blanc massif. The outing was completed with Marco Farina and Marco Majori after a first attempt with Andrea Peron.

In a winter where snow seems to be lacking on this side of the Alps, a skier does not have much choice: either adapt to the situation, or succumb to sadness. In my case I was about become depressed, but then I convinced myself that somehow I had to react. And so it was that I ended up making absurd approaches by bike or on foot, just to ski a few hundred meters.

During one of these pilgrimages I happened to pass below a great line of ice. Almost mechanically I went to have a look, took a photo and then continued on my search for snow. When the wind finally forced me back, taking away what little snow had remained hidden in the east-facing gullies, I had no choice but to dig my ice axes out of the garage.

The idea of standing in a queue at Cogne was perhaps worse than skiing on cement so I convinced Andrea Peron, with whom I’ve been working with for years for Karpos, to test the new range of ice climbing apparel on that line I’d noticed by chance. On that occasion we followed the main drip for two pitches, then branched off into the lefthand gully, past two steps with ice too thin for my ice climbing comfort.

This sidestep proved far more fun than we’d expected, with some sections that were by no means trivial. The two pitches through the small gully led us back to the main drip, immediately below a 30m grade 4 ice. This in turn led to another vertical step and some dubious ice. We finished our energies, pegs and diapers, we were left with no other option but to descend. During the rappel I couldn’t figure out if this was a retreat or whether we could consider the route completed.

This metaphysical doubt motivated me to give it a second go, this time with my strong Italian military corps colleagues Marco Farina and Marco Majori. Although they were trying Jedi Master, the photos immediately convinced them to take an active rest day. Unfortunately for Farina the crux pitch turned out to be a bad way to relax and demanded all his vast experience. Majo, not to be outdone, drew on his legendary ability to deal with the crusty ice I’d avoided halfway up and establish pitch that was slightly less steep just as psychologically demanding.

As for me, I enjoyed the day out as a client and was kindly given permission to climb the fun final section. This time, abseiling off 3 nuts at the last belay, the inner voice sounded right: I’d really finished the job. My colleagues also gave me the task of coming up with a name and route description.

I opted for Spirito di adattamento, Spirit of adaptation, in reference to the ability to adapt not only to taking my rusty ice axes out of the garage, but also to jump onto my bike early in the morning or ascend for a thousand meters with skis strapped to my rucksack. Now though should it decide to snow again, then I won’t end up abusing this talent and, above all, improvising in other areas, and go back to shredding some good turns.