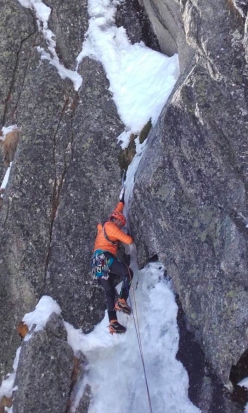 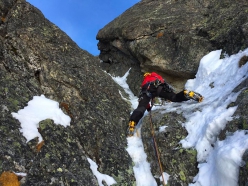 I believe anyone who has taken the Skyway, the cable car that leads from Courmayeur to Punta Helbronner, has admired all those spires that can be seen during the journey! However, seeing that the lift leads towards Mont Blanc, Aiguille Noire and Blanche, Pilier D’Angle and the Brouillard area, all of these soon distract the eye and mind and recall great mountaineering achievements!

And yet immediately to the right lies the magnificent Jetoula ridge, which measures almost 1200m in high, while to the left lies magnificent Aiguille de la Brenva! A vertical face almost 400m high that, wedged into the immense almost 2500m peak, pales in comparison

On this face there some beautiful rock climbs of considerable difficulty, established by ace alpinists such as Arnaud Clavel and Massimo Farina. Then there’s the famous Pere Éternel needle and, lately, some ice climbs!

The first line of ice climbed on this faces dates back to the early 2000s, Stop the War (6c/WI5 300m Marlier, Farina) then one on the pre-summit by Matteo Pellin and Rudy Buccella, and in 2016 two other beautiful lines: Million Reasons (400m WI5/M7 Gianpaolo Ducly, Marlier) and Sole (400m WI5/M6 Gianpaolo Ducly, Marlier). These are ephemeral mixed modern lines that add to what is on offer in an area that is easy to reach, especially if you use skis for the descent down the Toula Glacier to reach the base of the climbs!

It is a laboratory of new climbs, with some projects that have already been initiated that hold some great surprises in store. As well as pumped arms and brains!