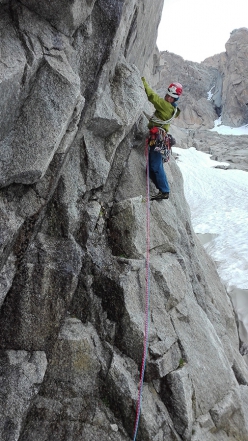 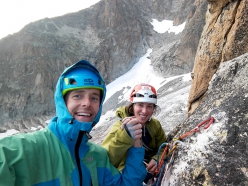 In the past, whenever we went climbing in the Mont Blanc massif we’d focus on the most popular areas, such as Aiguilles de Chamonix, Grand Capucin or Aiguille du Midi.

Last August however we decided to climb above the Argentière glacier which is far less frequented. Maybe that's why we met only three other teams during our stay. Our aim was clear - make some first ascents.

In 2016 François Damilano published his new guidebook called Mont Blanc Granite, a Rock Climbing Guide Argentière basin and this highlighted the valley’s potential for new rock climbs. After a great warm-up along the route Rêve de singe (7a, 200 m) to the summit of La Vierge we picked two beautiful and logical lines.

The first route we climbed was a the completely new Crystal route, 280 meters high with 6c difficulties on the Contreforts Charlet-Straton. We chose a fast and light style due to the weather conditions, as the storms were quite close to us. We only took pegs and Friends and while we left a peg in-situ on the first pitch, all belay stations were rigged with Friends. We abseiled down to our starting point via the Patagonique route established by Jean-Luc Amstutz and Romain Vogler as thunder rolled in. We were lucky however, because it started to rain right after we zipped up our tent door.

The next day we climbed on Plateau du Jardin. The first two pitches were shared with the old classic route, after which we continued up an obvious crack line to the left. We took a drill with us too, and this proved the right thing to do because this climbing was quite challenging, with difficulties up to 7b in its 260 meters. On the 4th pitch we placed two bolts, another three on pitch 5 and equipped each belay station with two bolts. We named the route In memory of Červienka and we would like to dedicate the climb to our dear friend Maroš Červienka, who went missing on July 1, 2018 during his free solo ascent of the Major route on the east face of Mont Blanc.

We are looking forward to the next adventure like this one. Be careful, stay safe.
Ondrej Húserka, Ján Smoleň