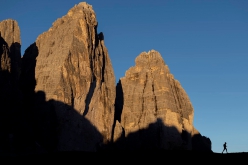 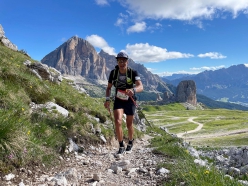 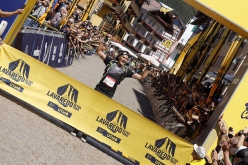 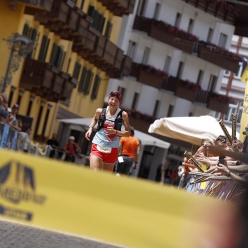 Sweden’s Mimmi Kotk and Germany's Hannes Namberger won the La Sportiva Lavaredo Ultra Trail by UTMB 2022. Namberger set a new race record and doubled his takings after winning last year, while Kotk dominated after placing third in 2021. The UltraDolomites competition was won by Matteo Anselmi from Italy and Kelly Wolf from the USA.

A rocket ship landed in Cortina d’Ampezzo. The German Hannes Namberger from Ruhpolding, born in 1989, has won the Lavaredo Ultra Trail, the highlight race of the 2022 edition of La Sportiva Lavaredo Ultra Trail by UTMB®, the only Italian date of the UTMB® World Series. 1,500 runners competed along 120 kilometres with an elevation gain of 5,800 metres between Friday 24 and Saturday 25 June.

This was no simple victory: Namberger won with a record time of 11h56’28", beating the record he himself had set last year (12h02’12"). The race started at a fast pace but nobody could compete with the strength of the Bavarian athlete who ran through the last straight stretch full of people to reach the finishing line at the feet of Cortina’s bell tower where he was met by an out-and-out ovation. Second place for the Swiss athlete Gian Marchet Schicktanz (12h07’02") and third for China’s Jiasheng Shen (12h28’47") who had placed second in 2019.

"Winning for the second time in a row here is somewhat surprising", says Hannes Namberger. "Coming back to Cortina after winning and setting a record in 2021 was risky but I like challenges and I wanted to try even though I wasn’t in the best form. It went really well. I think I ran an intelligent race".

Among the female runners it was Sweden’s Mimmi Kotka who placed first clocking a time of 14h51’25". Second and third place went to Poland’s Katarzyna Solińska (15h11’24") and Austria’s Esther Fellhofer (16h01’22").

"I started off really strong, maybe too strong", explained the winner Mimmi Kotka. "Then I had a few falls which slowed me down. In the final stretch I struggled some but managed to hold the lead. I’m super happy".