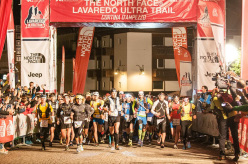 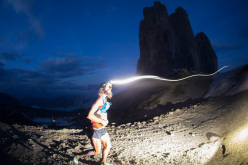 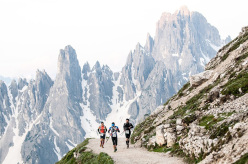 The Americans Anton Krupicka and Rory Bosio have won the eighth edition of the North Face® Lavaredo Ultra Trail. In the shorter race, the Cortina Trail, victory went to the German Fabian Schnekenburger and Lara Mustat.

A thousand athletes from 56 nations tackled the longer route of 119 kilometres and 5,850 metres of altitude gain. The trailers left last night at 11 pm from Corso Italia, in the heart of Cortina d'Ampezzo, in order to first climb up to the Tre Cime di Lavaredo and then pass through incredibly beautiful places such as the Croda Rossa, Passo Falzarego, le Cinque Torri, Passo Giau and Croda da Lago.

The American Krupicka (Team New Balance), in his first appearance in Italy, won with a time of 12:42'31", in second position was his countryman Mike Foote (Team The North Face®) with a time of 12:5'38". Krupicka, with his minimalist look, has been extravagant in the time of his stay in the Ampezzo valley, winning over many fans who applauded and encouraged him all the way along the final stretch of the race as if he were a local athlete.

The Lithuanian Gediminas Grinius completed the podium with the time of 13:01'22". Of note was the excellent performance of Ivan Geronazzo, sixth at the finishing line and the first Italian to qualify.

Krupicka set off watching what his rivals were up to. At the third checkpoint at Federavecchia Gediminas Grinius was the first to arrive followed by Iain Don-Wauchope. At the next checkpoint, at the Auronzo Refuge, Krupicka had already taken first position. Behind him was an unrestrained Fulvio Dapit, who at Cimabanche had gained first position. Unfortunately Dapit, before passing Col Gallina, was forced to drop out, leaving the way free for Krupicka. On the ascent toward the Averau Refuge, the Lithuanian stayed in second position, which he then had to leave to Mike Foote.The positions in the last descent did not change; Krupicka inscribed his name in the golden roll of the North Face® Lavaredo Ultra Trail, Foote and Grinius took second and third position respectively.

Among the women it was a purely sporting battle between the American champion Rory Bosio (Team The North Face) and the Italian Francesca Canepa (Team Montura). Initially it was Bosio who took charge of the race, then at Forcella Lavaredo Francesca Canepa took over. Then the Italian athlete was overtaken by Bosio who increased her advantage until finishing with a time of 14:29'54". Canepa took the second placing with 14:45'55". Katia Fori, after being on the attack for the whole race, managed to earn third place after almost 16 hours of competing.

As regards the Cortina Trail (47 kilometres and 2,650 metres of altitude gain), the German Fabian Schnekenburger dominated with a time of 4:37'28" in front of the local Manuel Speranza and Domenico Longo. Of the women victory went to Lara Mustat with 5:51'05". Anja Maurer and Sylvaine Cussot were second and third respectively.
While in Corso Italia participants continue to arrive, the programme for tomorrow has been confirmed with the arrival of the last competitor foreseen for 6 am. The final conference with the winners will be at 10 am at the Casa delle Regole. The official prize giving ceremony will be held at 11:30 in Piazza Dibona in Cortina d'Ampezzo under the characteristic shell.