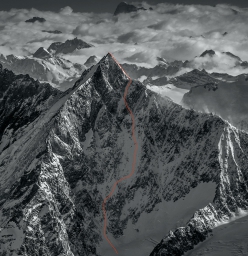 The SW Face of Täschhorn in Switzerland and the line skied by French mountain guides Paul Bonhomme and Vivian Bruchez on 28/05/2021
Photo by Thomas Crauwels / www.thomascrauwels.ch

French alpinists Paul Bonhomme and Vivian Bruchez have skied the SW Face of Täschorn (4491m) in Switzerland. The new line is likely to be the first descent of this imposing face.

French alpinist Paul Bonhomme has made a fitting end to his 10x project by skiing a spectacular line down the SW Face of Täschhorn (4491m) in Switzerland’s Valais.

As on previous occasions in the past the mountain guide explored the unknown with his hardcore colleague Vivian Bruchez, and after dropping in the duo negotiated difficulties estimated at 5.4/E4.

The 950m line was skied in its entirety, apart from one 5m section close to the base which had to be downclimbed. The line is highly likely to be the first-ever descent of the awesome NW Face, is called X and culminates five months of activity that "have been quite intense."