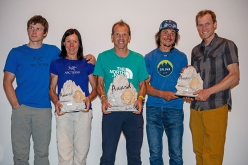 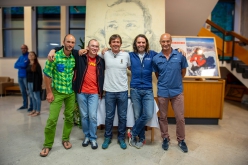 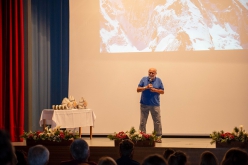 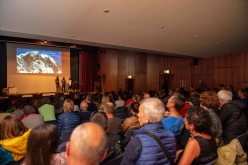 The 5th Karl Unterkircher Award was awarded on 14 July 2018 in Selva di Val Gardena, Italy to Simone Moro who, together with Ali Sadpara and Alex Txikon, carried out the first winter ascent of Nanga Parbat in February 2016. The other climbers that had been nominated Ines Papert and Luka Lindič for their new route on Kyzyl Asker in Kyrgyzstan (China), and Simon Gietl and Marcel Schenk for the new mixed climb up Pizzo Badile in Switzerland.

Third time lucky as the Brits would say. This is perhaps what Italian mountaineer Simone Moro thought last Saturday when, at his third nomination, he won the fifth Karl Unterkircher Award, the prize designed to remember South Tyrolean alpinist Karl Unterkircher who died tragically precisely 10 years ago while attempting to establish a new route up the difficult and immense Rakhiot wall of Nanga Parbat.

The spirit of the biennial award isn’t to place one climb on a pedestal, but simply to highlight the ascent in relation to what drove Karl Unterkircher. It is in this light that the other two selected climbs were also celebrated: that of Germany’s Ines Papert who with Slovenia’s Luka Lindič made the first ascent of Lost in China (ED, WI5+, M6, 1200m) in October 2016, a "perfect high-altitude ice climb" up the SE Face of Kyzyl Asker (5842m) in Kyrgyzstan, and that of Italy’s Simon Gietl and Switzerland’s Marcel Schenk who, in November 2016, established Amore di Vetro (800m, M5, R), an ephemeral mixed climb up the NE Face of Pizzo Badile.

Special guest of the awards ceremony was, as usual, Kurt Diemberger, the only living mountaineer to have made the first ascent of two 8000ers who fondly remembered Unterkircher.

The jury of the 5th edition of the "Karl Unterkircher Award" composed by Silvio Mondinelli (president), Thomas Huber, Carlo Caccia, Simon Kehrer and Hubert Moroder met today, 14/07/2018 to decide who to award the recognition.

The choice proved to be extremely difficult due to the very high level of all the climbs named, which, representing different expressions of contemporary alpinism, are difficult to compare. All three companies are important pages in the history of confrontation between man and mountain.

The awarding of the prize is therefore not intended to put a level above the other, but to highlight one of these pages. Ten years after Karl's death on Nanga Parbat, the jury decided to honor the "Karl Unterkircher Award" to Simone Moro, Ali Sadpara and Alex Txikon reached the summit on 26 February 2016 as first winter ascent the summit of Nanga Parbat, which was also Karl's last big dream.

The spirit of Karl will always remain on this Himalayan giant which - as Kurt Diemberger wrote - is not simply "the bare mountain" filed by avalanches or "the king of the mountains", but also the "Diamir" where all the spirits of the mountains live.

The jury was particularly impressed by the story of Ines Papert and Luka Lindic on Kyzyl Asker in China and the ability to capture the moment of Marcel Schenk and Simon Gietl on Pizzo Badile. Both of these companies reflect Karl's style in dealing with the mountains in every way.

25.05.2018
Karl Unterkircher Award 2018 nominees for 5th edition
On July 14, 2018 Selva di Val Gardena will host the fifth edition of the Karl Unterkircher Award in memory of the South Tyrolean alpinist who died ten years ago on Nanga Parbat. The alpinists nominated for the 2018 award are Simone Moro, Ali Sadpara and Alex Txikon for the first winter ascent of Nanga Parbat, Ines Papert and Luka Lindič for their new route up Kyzyl Asker in Kyrgyzstan (China), and Simon Gietl and Marcel Schenk for the new mixed climb up Pizzo Badile in Switzerland. Special guest: Kurt Diemberger

11.08.2016
Jon Griffith and Andy Houseman win the Karl Unterkircher Award 2016
On 27 July 2016 British mountaineers Jon Griffith and Andy Houseman received the 4th Karl Unterkircher Award for their first ascent of Link Sar West (6.938m - Karakoram). The other two ascents that had been nominated were Marek Raganowicz and Marcin Tomaszewski winter first ascent of Katharsis on Norway’s Troll wall and the first ascent of via Degli studenti up the NW Face of Civetta (Dolomites) by the Italians Giorgio Travaglia, Alex Walpoth, Martin Dejori and Titus Prinoth.

17.07.2008
Karl Unterkircher perishes on Nanga Parbat
On 15 July the South Tyrolean mountaineer Karl Unterkircher fell into a crevasse at circa 6800m on Nanga Parbat’s Rakhiot Face. Unable to descend, his two climbing partners Walter Nones and Simon Kehrer have been forced to continue their ascent. A rescue expedition is departing from Italy at this very moment.