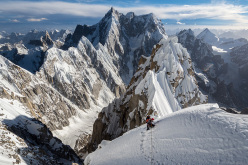 Andy Houseman tops out the NW Face of Link Sar West in Karakoram, climbed together with Jon Griffith in July 2015. K6 in the background.
Photo by Jon Griffith Alpine Exposures 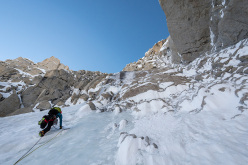 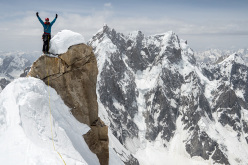 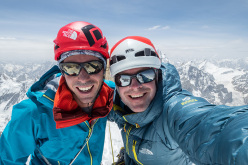 In July 2015 British alpinists Jon Griffith and Andy Houseman made the first ascent Link Sar West, a 6,938m summit in Pakistan’s Karakoram. The two climbed the Northwest Face via their route Fever Pitch.

Summer 2015 saw British alpinists Jon Griffith and Andy Houseman engaged in a tough physical and mental obsession on the NW Face of Link Sar, an unclimbed, complicated peak that at 7,041m marks the watershed between the remote Karakoram valleys of Charakusa and Kondus. The Brits knew the mountain well: in 2012 Griffith had attempted it unsuccessfully with Will Sim, in 2013 he had teamed up with Houseman while in 2014 together with America’s Kevin Mahoney Griffith had climbed through a storm to finish the committing NW Face. At the time the summit ridge proved too dangerous however and they were forced to retreat.

Armed with this knowledge, in July 2015 Griffith and Houseman aimed to initially follow the same line before continuing further up the face to access the ridge at a higher point. Leaving Base Camp on 12 July proved arduous as knee-deep snow slowed progress on the terrifying approach glacier, so much so that they even considered giving up prior to starting properly. They persevered however and crossed the Bergschrund on 13 July at circa 5600m and then made their first bivouac at circa 6,100m. Noting that the face was not in perfect conditions, despite the enticingly clear weather the duo opted to stay put and wait for the huge amounts of fresh snow to settle on the threatening upper section of the route. The next day a "long and hard" 17-hour push resulted in them topping out the NW Face-

The bivouacked at circa 6,800m but at this point the consistently steep black ice and altitude had taken took its toll: Griffith developed an aching fever. The next day was spent nervously waiting for him to recover. Not wanting to give up a fourth time though, on 17 July Griffith felt strong enough to continue and - having taken the decision to pass the point of no return and sever their lifeline with the known North Face - the committed themselves to proceeded along the ridge to reach the Western summit of Link Sar at 6,938m.

Although the original plan had been to continue onwards to the main summit of Link Sar, they chose not to tackle the nearly 1km complicated and corniced ridge line and instead decided to descend. This proved a wise and at the same time complicated decision: Griffith’s fever had returned with a vengeance and they bivouacked at 6930m while waiting for cooler and safer conditions. At 3am on 18 July they started the 2400m descent down the unknown South Face. A series of extremely committing abseils down a large couloir led to to the arduous return via the Charakusa Glacier. They reached base camp just as bad weather set in, seven days after having departed.

The new route has been aptly called Fever Pitch and commenting after their ascent, Griffith noted "it was a shame not to head to the main summit, but we’d run out of food and weather window. I think if I hadn’t been so ill we could have given it a good shot, but that’s the luck of the game out there. We had a tight weather window and we used it to the best we could. We came off the hill just as the bad weather rolled in and it’s really not a mountain you want to come down in bad weather, it could easily turn to a very serious fight for survival that descent!"

For more information about the ascent and excellent photos check out www.alpineexposures.com