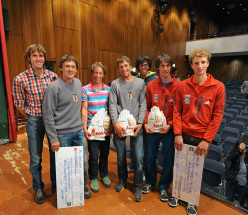 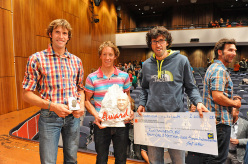 On Wednesday, July 23 at Selva di Val Gardena, Dolomites, the 3rd Karl Unterkircher Award 2014 was given to Simon Anthamatten, Matthias Auer and Hansjörg Auer for their first ascent of the East Face of Kunyang Chhish, Karakorum / Pakistan.

On Wednesday evening at Selva di Val Gardena in the Italian Dolomites three groups of alpinists presented their climbs to a large audience. The nominees for the 2014 Karl Unterkircher Award were:

The jury of the 3rd "Karl Unterkircher Award" was comprised of Wolfgang Nairz, (president), Hanspeter Eisendle, Simon Kehrer, David Demetz and Carlo Caccia and met on 23 July to decide on who should receive the award

The decision proved extremely difficult due to the outstanding quality of all three climbs that, since they all represent different facets of alpinism, are impossible to compare. The "Karl Unterkircher Award" was careful therefore to not place one particular climb at the forefront but, instead, to draw further attention to the other climbs, in keeping with the spirit of Karl Unterkircher and the award.

The jury decided to assign the third Karl Unterkircher Award to Hansjörg Auer, his brother Matthias and to Simon Anthamatten who made the first ascent of the East Face of Kunyang Chhish, Karakorum / Pakistan. The jury motivation reads as follows

"The highest degree of mixed climbing achieved to date in the Alps was taken to the Himalayas. Conditions were extremely difficult. They were alone, at high altitude, and weather conditions compounded to the difficulties. The choice of a minimalist alpine-style ascent, excellent planning and the use of a tiny weather weather resulted in the summit being reached."

The jury was particularly impressed by the imagination and also the implementation of the climb Legrima on Sassolungo, as well as by the courageous efforts of the partnership that climbed Notti Magiche on Torre Egger.