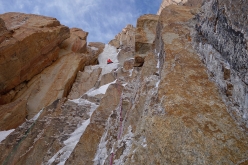 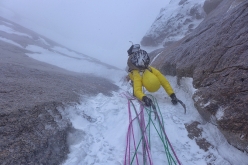 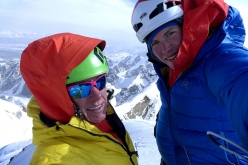 Ines Papert and Luka Lindič on the summit Kyzyl Asker (5842m), Kyrgyzstan on 01/10/2016 after having made the first ascent of 'Lost in China' up the mountain's SE Face
Photo by Luka Lindič, Ines Papert 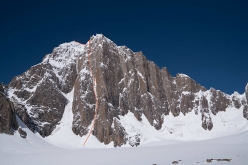 Six years after having made her first attempt up the SE Face of Kyzyl Asker, a remote mountain on the border between China and Kyrgyzstan, Ines Papert has now successfully climbed the line she originally envisaged together with her Slovenian climbing partner Luka Lindič.

In 2010 Papert travelled to the wild Kookshai Too mountain range with Thomas Senf and Wolfgang Russegger, but despite all their efforts the trio was forced to abandon its summit bid circa 300m short of the summit due to heavy snowfall and avalanches. A year later Papert returned together with Wolfgang Russegger and Charly Fritzer, but an attempt up the SE Face of Kyzyl Asker was stopped in its early stages as Fritzer encountered health problems. While he recovered, Papert and Russegger consoled themselves with the first ascent of Quantum of Solace, a plum line up the Great Walls of China, a huge rock bastion less than an hour from Base Camp. But the seed had been sown and Papert vowed to return, sooner or later.

The opportunity arose earlier this year when the former ice climbing world champion showed Lindič a photo of the face and the obvious line she had in mind. "I could feel his enthusiasm and realized straight away that he’d be the ideal partner” Papert told planetmountain.com "We’d only climbed together on Triglav before, and this was our first joint expedition. But it certainly won’t be the last."

Papert and Lindič acclimatised by making what is likely to be the first repeat and first free ascent of Border Control (ED, WI 5, M7, 650m, first ascent Guy Robertson, Es Tresidder, 2004) up the NE Face of the Great Walls of China on the 21st of September 2016.

At 5am on 30 September the two set off and, simul-climbing through the dark, the duo gained ground quickly, ascending through huge roofs of ice. Papert lost sight of Lindič as he led a pitch, then all of a sudden she heard a piercing scream. Lindič let out a howl of joy when he saw what lay before them: perfect ice led their way to the summit ridge. Papert says neither she nor Lindič had previously climbed such a perfect ice and mixed route at this altitude.

The two continued climbing throughout the entire day and as night fell a thunderstorm approached. In the dark once again, they reached a point about 2 pitches below the summit ridge and set up an uncomfortable and extremely exposed bivy. Spindrift beat down on Papert and Lindič and after a tough and severely cold night the two continued their ascent the next morning. They reached the summit ridge around 10am and then stashed their gear and ropes before reaching the summit at 12:10 on 1 October. Worried about another incoming storm they quickly rappelled down their route, using only Abalakov anchors for belays. They reached ABC at 7pm and immediately afterwards a massive thunderstorm swept across the mountain, chasing spindrift avalanches down the face.

The 1200m new route is called Lost in China and breaches difficulties up to ED, WI 5+, M6. After the ascent Lindič commented "It is very rare to climb on proper water ice on a mountain like that. I feel very lucky that I was able to be part of Ines' idea and profit from her knowledge she gained on previous visits to the mountain."

Papert adds: "This was my third time on Kyzyl Asker. After the second failed attempt I needed to let the idea rest, I didn't want it to become my purpose in life. After several teams attempted the route the idea grew again. Failure is part of climbing. And so is patience and sometimes a third attempt. I am simply happy to be able to experience this moment."