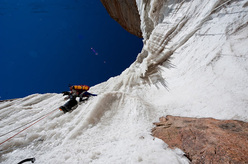 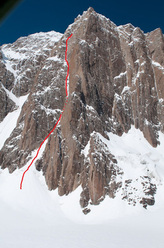 Ines Papert, Thomas Senf and Wolfgang Russegger have failed 200m shy of the summit in an attempt to establish a new line up Mount Kyzyl Asker, Kyrgyzstan.

German climbers Ines Papert, Thomas Senf and Wolfgang Russegger have returned home from a trip to Kirgistan where they attempted, yet failed to complete, a new line up the SE Face of the 5842m high Mount Kyzyl Asker in the Kookshai Too mountain range.

Based on a tip-off by Canadian ice climber Sean Isaac who climbed in the area in 2001 together with Scott Decapio and described it as being "a veritable untouched Chamonix, minus the crowds, cafes and telepheriques", the trio departed at the end of September. After some logistical problems connected to the early onset of winter they managed to establish ABC at 4600m, circa 30 minutes from the SE Face.

Ill health was followed by a first failed attempt due to terrible weather and ensuing 10 day wait, and the three finally set off on 19 October. In 17 hours they ascended over 1000m to reach the final headwall, circa 200m beneath the summit where the endured the hardest bivvy ever. Heavy snowfall, strong winds with temperatures down to -30°C, avalanches and a stove which failed to work were the reasons why the trio then descended, intent on returning next year to complete the business.

After bidding farewell to ice climbing competitons Ines Papert has devoted her attention to expeditions to the greater Ranges, which have resulted in climbs such as Kwangde Shar in Nepal, a new route in Canada's Cirque of the Unclimbables and some tough ice climbing in Scotland.

On her return Papert told Planetmountain: "I'd describe the climbing as being... fantastic. The rock is extremely compact and although there were superb ice conditions, on the whole it was very difficult indeed. It's almost always vertical and we had to climb some mixed M7 and WI7. We climbed using trad gear and ice screws and we descended after sitting through a stormy night, marked by immense amounts of fresh snow and ice cold due to the spindrift which continued to fall onto us. We almost always abseiled off Abablakov threads and used some slings. Kyrgyzstan is a great and extremely wild land... I can't wait until next year."