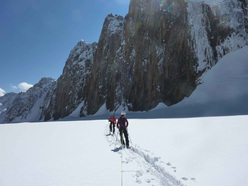 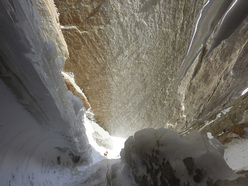 Ines Papert during the first ascent of Quantum of Solace, Great Wall of China, Kyrgyzstan
Photo by archive Ines Papert 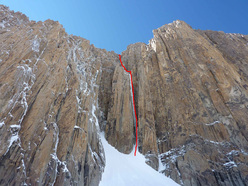 Quantum of Solace, Ines Papert and Wolfgang Russegger breach the Great Wall of China in Kyrgyzstan

After an aborted attempt on Mount Kyzyl Asker, Ines Papert and Wolfgang Russegger established Quantum of Solace (ABO, WI 7+, M7, 600m) up the Great Wall of China in Kyrgyzstan.

In 2010 German alpinist Ines Papert failed 200m short of the summit in her bid to establish a new line up the SE Face of Mount Kyzyl Asker in the Kookshal Too mountain range in Kyrgyzstan. Despite the difficulties the experience with Thomas Senf and Wolfgang Russegger proved fantastic and after having vowed to return as soon as possible, the opportunity finally arose this autumn.

Papert travelled to Kyrgyzstan in September along with her son and after an idyllic couple of weeks exploring and paragliding off numerous lower peaks together with Wolfgang Kurz things took a turn for the worse. Although Wolfgang Russegger and Charly Fritzer's arrival from Austria heralded the true start arrived from Austria, the expedition suffered an important set back when the truck got stuck in a swamp and all the gear had to be transported on foot to Base Camp, 2 km away. ABC beneath the SE Face lay a further 20km and 1000m altitude higher and this proved taxing and the Austrians subsequently fell ill, delaying the planned first assault. In addition, disaster had then averted when Fritzer fell into a crevasse on the Comorva glacier on his way to Advanced Base Camp, thankfully he escaped unscathed. The trio finally set off at 4.00am on 12 September via the same route as last year but this was not to be their day: they climbed swiftly to reach the only bivvy at 5300m at 10.00am, and the heat and falling ice convinced them to sit it out and wait for cooler temperatures the next morning. This was not to be though since Fritzer started to develop signs of acute altitude sickness and they immediately abseiled off and returned to Base Camp, where Fritzer recovered.

With time running out and and frustration growing, Papert and Russegger set off to climb a different objective, the nearby Great Wall of China. The two picked a plum line and, climbing alpine style, they forged their 600m "Quantum of Solace", a tricky mixed route "which demanded all my courage and climbing ability". The line follows fragile ice drips, overhanging rock and ice as well as waist deep powder snow and is graded ABO, WI 7+, M7.

Ines, you had a difficult start, but you didn't return empty handed
Unfortunately we didn't get a second chance at the face. I tried hard to convince the team to give Kyzyl another go, but to climb such a big route you need to be in ideal shape and perfectly motivated. Time was running out. And despite Wolfgang not feeling 100%, I managed to convince him to give The Great Wall of China a go.

Tell us more about this mountain.
The Great Wall of China is the massive face located to the left of Mount Kyzyl Asker and is in fact an independent mountain, on the border between China and Kyrgyzstan. The face is circa 1 km long and steep throughout, offering climbing similar to that in Chamonix. The potential for new routes is limitless. Our route started circa 1 hour from ABC at 4500m and finished at 5100m.

How did it go on Quantum of solace?
Before traveling to Kyrgyzstan I had spoken to a Scottish team which had climbed up the Great Wall of China years ago via a different new route, almost to the top. They didn't use any bolts and so I adopted their same ethics. We climbed with a full set of Cams from 0.3 to 3, a full set of nuts plus a half set, but at times it was difficult to protect and most of the ice didn't feel solid enough for ice screws. We didn't place any bolts and apart from some nuts, a few pegs and a couple of slings used in V-threads we did not leave anything behind. I led the entire line because Wolfgang hadn't recovered 100% from his illness. We were on the trot for 18 hours, of which 11 were spent climbing the route.

ABO, WI 7+, M7. Not really a walk-over
It's a mega version of the famous Polar Circus in Canada. In the massive gully it almost felt as if I was in a canyon, surrounded by fantastic granite features. The ice is really steep, full of air holes and the overhanging sections through the ice flutes were hard to protect. And even the transition sections in waist-deep powder were not particularly easy. I had to summon all my strength and conviction to climb the final meters to the top and I almost gave up. Breaking trail through the deep, unconsolidated snow took a long time and was really tiring. But when you get so close to the top, you just don't give up.

A minor detail: on reaching 5100m you descended.
The range has no precise summit, but instead the face opens up onto a massive summit ridge. We were surrounded by smaller rock towers, but they certainly weren't any higher than our highpoint. We abseiled off at sunset, reached ABC at 23.00 and then descended to Base Camp the next day. The whole undertaking was significantly harder than I had expected and certainly a good consolation prize.

A consolation prize...?
As the route name says, the ascent was a consolation, but it also showed me that to succeed on a difficult objective, everything needs to work 100%. I needed lots of patience, learnt a lot about expedition dynamics and relationship with other climbers and had time to think. I found it hard to play the waiting game because my enthusiasm for Kyzyl was immense. I suppose at the end of the day I'm slightly sad that we didn't succeed on the main aim, but proud nevertheless of 'quantum of solace'.

Do you think you'll return to Kyzyl Asker?
I still carry the picture of this mountain in my pocket, as I did for 2 years. Maybe there will be another chance, but I've already spent so much time there…to be honest, if I go again (if it's still unclimbed) it certainly won't be within the next 2 years. I've got plenty of other ideas to work on!