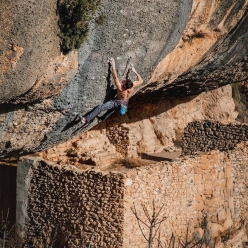 Stefano Carnati climbing Demencia Senil at Margalef, the 9a+ freed by Chris Sharma in 2009.
Photo by Marco Zanone 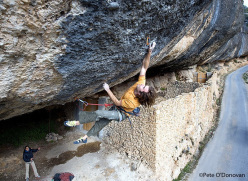 Stefano Carnati fast and furious up Demencia Senil 9a+ at Margalef

At Margalef in Spain Stefano Carnati has repeated Demencia Senil, the 9a+ sport climb first ascended by Chris Sharma in 2009.

Ten years ago Chris Sharma made the first ascent of Demencia Senil, at the time the hardest sport climb in Margalef. The small village tucked into the rolling hills of Catalonia was still in the early stages of its massive development but this would soon change; over the next decade, thanks to its enormous potential and continuous new routing, it transformed into one of the most popular climbing ares in the world. Although Demencia Senil is no longer Margalef's hardest, the line is a beacon for the upper realm of difficulty and remains a fierce testpiece, a coveted slice of climbing history reserved for the best.

Obviously Italy's Stefano Carnati couldn’t ignore the call of this overhanging sequence of single finger and two finger pockets. The 21-year-old is currently in great shape, fresh from his 8C boulder repeats (Dreamtime and The Story of Two Worlds at Cresciano), and now he’s made an extremely fast ascent of one of Sharma’s king lines. Carnati needed no time at all: after a couple of attempts in 2017 to check out the moves, yesterday he only needed a couple of tries before the redpoint. Not even 24 hours after having driven 1300 km to Margalef...