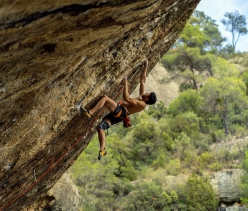 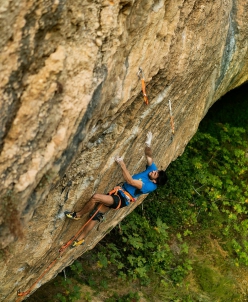 Buster Martin climbs First Ley 9a+ at Margalef in Spain

Buster Martin has repeated First Ley 9a+ at Margalef in Spain. In doing so he has become only the second Briton to climb a confirmed 9a+ after Steve McClure.

After a concerted effort 23-year-old Buster Martin has managed to repeat First Ley, the 9a+ at Margalef in Spain which shares the same start as Chris Sharma’s 2011 9b First Round, First Minute before breaking off left to avoid the bouldery crux finish.

Martin first attempted the route in January this year and made a couple of trips to Margalef battling against the route’s difficulties, the heat and humidity before making his powerful ascent two days ago after about 20 days on the route. "I fell off the last move about 10 times" Martin told planetmountain.com "but in the end I was rewarded for the patience, had some perfect conditions, and the magic happened."

In the past Martin has onsighted up to 8b and he forms part of the new generation of young British sport climbers making a name for themselves for hard redpoints. Aged 16 he became the youngest Brit to climb 8c (Bat Route at Malham) after sending 8b at 15 and 8a at 14. With his ascent of classic Rainshadow at Malham Cove in 2018 he climbed his first and so far only 9a, while his recent success makes him only the second Brit to climb a confirmed 9a+ (John Gaskins' 2004 Violent New Breed at Giggleswick is unrepeated and disputed by some) more than a decade after Steve McClure added the extensions to Overnite Sensation at Malham and Northern Exposure at Kilnsey.

Martin's ascent is documented below. And, yes, it's normal speed, not fast forward...

Here's the footage of me climbing First Ley 9a+ yesterday! By far the hardest thing I've climbed. Honestly the more I climb the less grades motivate. Although 9a+ has always stood out as a big goal for me. It's just a number but was the hardest in the world when I started climbing. A grade I saw as reserved for the pros, the likes of @chris_sharma and @ste_mcclure (who is the only other Brit to climb a route confirmed at the grade). It wasn't the external validation or comparison to others that inspired me. But the committment and passion it seemed to take to climb at this level. That's what motivated me to try! I'm sure most climbers can relate. As soon as I got on the route I was hooked, the grade didn't matter and I'd found the opponent for the battle id always wanted. Upon topping out I felt a perspective and gratitude for the 11 month journey it took me to get there. Applying, dedicating myself and pushing through personal barriers in the same way that has always inspired me. in the end that was the real pleasure. Pushing myself and spending time in nice places with good people. It's completely trivial and selfish but I can't get enough.... Onto the next one @moonclimbing @petzl_official @lasportivauk @lasportivagram