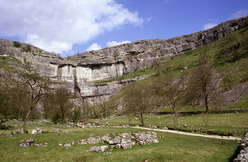 On 28/05/2007 Steve McClure freed the extension to Overnite Sensation, a probable 9a+ at Malham Cove, England called Overshadow.

Steve McClure is back to his old tricks. Almost a decade after putting up Mutation 9a, on Monday 28 May the 36 year old established one of Britain's hardest sports route, a 9a+ at Malham Cove. Much like Mutation, which is an extension to Jerry Moffat's Evolution 8c+, the new 9a+ is an extension to a previously existing 8a+, Overnite Sensation.

Steve feels his newest creation is harder than his three 9a's, Mutation at Raven Tor, Northern Lights at Kilnsey Crag and Rainshadow at Malham. He spent circa 30 days working the route and this in itself is a strong indication to the intensity of the line, seeing that he needed circa 15 days to come to grips with Northern Lights (origianlly Ben Moon's project) at Kilnsey, and circa 22 to climb Rainshadow at Malham. Currently the only other proposed 9a+ in the UK is Violent New Breed at Giggleswick, established by John Gaskins in 2004.

Steve wrote on www.ukclimbing.com "It seems important to stick a number on things these days. If you don't, everyone else will anyway. I suggest it could be 9a+, an estimate based on effort and experience. But then how important is it to get it right? Not important at all! Whats important is honestly suggesting a level. If it gets down graded so what, if it gets up graded, so what again. What counts is its a great route that tested me right to my limit. Had it been 9b or 8c the journey from start to finish would have been no more or less rewarding."