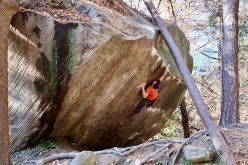 Italian climber Stefano Carnati has repeated Dreamtime at Cresciano in Switzerland. Established in 2000 by Fred Nicole, this was the first boulder problem in the world to be graded 8C.

Italy’s Stefano Carnati is best known for competition climbing and for his hard sport climbs at the crags where, slowly but surely, he’s ticking some of the world’s most famous such as Wolfgang Güllich’s Action Directe in the Frankenjura, Germany, and Chris Sharma’s Biographie at Céüse in France. Now the 21-year-old has ticked another modern classic, namely Dreamtime at Cresciano in Switzerland. The world’s first 8C, freed in 2000 by Fred Nicole, is a strong contender for being the most famous and desired problem of all; understandably it was also on Carnati’s "lifelist". Priori to yesterday’s send, Carnati had climbed problems up to 8B such as Heritage in Val Bavona, Vecchio Leone at Brione and Mithril in Cresciano.

I’ve always dreamt being able to send this magnificent line one day. For me it’s a true icon, and I reckon it is for all other climbers, too. I was so taken in by it that, I have to confess, I tried the stand start even when I had absolutely no chance of sending it.

During this season’s first bouldering session I succeeded in sending the stand start. This gave me some confidence and I realised the time might have come.

I returned last Saturday tougher with Simone Tentori & Co, but returned home empty-handed. Yesterday, on my first attempt after my warm-up, everything went perfectly!