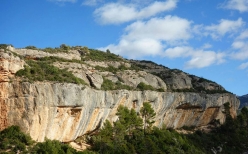 The crag Margalef in Spain
Photo by Carlo Cosi 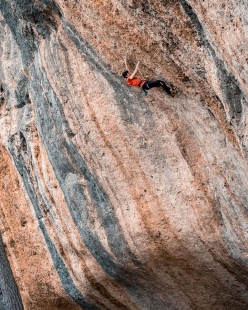 Roundup of recent redpoints at Margalef, Siurana and Perles in Spain by the Italian climbers Laura Rogora, Marcello Bombardi, Stefano Carnati and Marco Zanone. In addition, noteworthy attempts at Saint Loup in Switzerland by Riccardo Scarian and Alessandro Zeni.

The Christmas holiday period is coming to an end and it’s time take stock of what some of Italy’s best sport climbers have been up to in Spain which, year in year out, continues to be a favourite winter hotspot.

17-year-old Laura Rogora kicked off the year with her January 1st ascent of the 9a a Esclatamaster at Perles. The first day of the year and 9a once again, but this time a different crag and different climber: Marcello Bombardi nailed Estado Critico at Siurana and then, just to play it safe, ticked L'odi social 8c+ the next day. Marco Zanone also repeated this famous testpice put up by Carles Brasco, describing it as "one of the best climbs I’ve ever done", before moving down to Margalef and clipping the chains of La Ley Innata 8c+/9a. Last but not least: during two very short trips to Margalef and Siurana, Stefano Carnati has climbed a slew of 8c’s and retuned home with La ley innata 8c+, L'odi social 8c+ and A muerte 8c+/9a.

On a side-note, Riccardo Scarian and Alessandro Zeni opted for a quick visit to Saint Loup in Switzerland; while Scarian tried Bimbaluna, Zeni tried to link this classic 90’s slab fest established by François Nicole with another legendary slab, Bain de Sang put up by his brother Fred Nicole. The idea is to climb the crux of Bain and link this into the crux of Bimbaluna. While neither Scarian nor Zeni succeeded, the connection promises to be extremely interesting and also, in the words of Zeni, "somewhat difficult". Yes indeed.

Am I living in a dream? • • Climbed "La Ley Innata" [8c+/9a] yesterday evening. Gave my % to get to the top. For sure the hardest route I've done in a while. • by Franz Carnati #margalef #spain #puremountain #edelweissropes #owlclimb @salewa @edelweiss