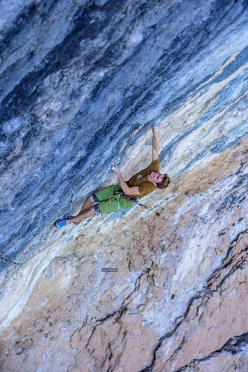 Seb Bouin making the first repeat of Mamichula, the 9b freed in 2017 by Adam Ondra at Oliana in Spain
Photo by Jan Novak

Yesterday at Oliana in Spain French rock climber Seb Bouin made the first repeat of Mamichula, the 9b sports climbed first ascended in 2017 by Adam Ondra.

News just in from Oliana in Spain where yesterday the French climber Sébastien Bouin managed to send the hitherto unrepeated Mamichula, the 9b freed in 2017 by Adam Ondra. The route connects Pachamama and Papichulo and was described by Ondra as demanding "incredible power endurance without any rest."

Bouin had got close in the past, even falling off the last hard move, but on yesterday’s redpoint he made sure he was belayed by the person who knows him best: his mother!

Bouin has several top routes to his credit, including the 9b Chilam Balam at Villanueva del Rosario in Spain and two unrepeated 9a+ in France, Les yeux plus gros que l’antre at Russan and La cote d’usure in the Gorges du Verdon.

Video: Adam Ondra making the first ascent of Mamichula 9b at Oliana, February 2017