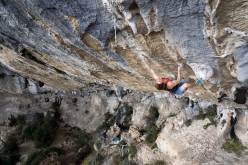 Sébastien Bouin at Russan making the first ascent of Les yeux plus gros que l’antre 9a/b, one of the most difficult sport climbs in France.
Photo by Raphaël Fourau

At the French crag Russan (Pont St Nicholas-Seynes) Seb Bouin has made the first ascent of 'Les yeux plus gros que l’antre'. 70 meters long and graded 9a+/9b, this is now one of the most difficult sport climbs in France.

After years of hibernation, at start of April the historic winter crag Russan in southern France was propelled into the limelight thanks to young Sébastien Bouin who freed a project bolted over 20 years ago in the enormous cave. The new route is called Les yeux plus gros que l’antre and boasts 70 meters of ultra-steep climbing with three "amazing boulders problems at the top" including a dyno to finish.

After having fallen off the dyno crux four times, on 3 April the 25-year-old finally clipped the anchors and put forward the grade 9a+/9b. If confirmed, then "Eyes bigger than the cave" is now one of the hardest climbs in the country after the 9b’s CRS (Mollans, Adam Ondra, 2015) and Eagle (St Leger du Ventoux, Adam Ondra 02/2018) and the hotly debated Akira (Fred Rouhling, 1995).

Given the length and the nature of the climbing, Bouin described the line as a "French Chilam Balam", referring to the famous 9b located at Villanueva del Rosario in Spain and repeated by the Frenchman in 2015.