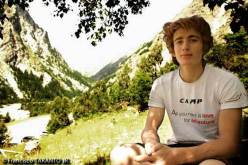 Jakob Schubert with Fight or Flight at Oliana at the end of 2015, Sachi Amma on the same route in February, Ethan Pringle and Jumbo Love ten days ago. The latest in this sending spree is Sébastien Bouin with Chilam Balam at Villanueva del Rosario in Spain… Four 9b ascents in the last 5 months are clear proof that the upper extreme of sports climbing is beginning to be in the grasp of many other top climbers, not just by the ‘usual suspects’ who have repeatedly climbed this hard - read Adam Ondra and Chris Sharma. Who, for the record, at the end of March freed El bon combat 9b/+ at Cova de Ocell.

The most recent confirmation of how the inner circle is widening comes from 22-year-old Frenchman Bouin who repeated Chilam Balam, the famous route freed - not without controversy - by Spain’s Bernabé Fernandez in 2003. This marathon 80m, 400m outing had originally been graded 9b+, a fact that caused quite a stir as it represented an enormous leap forward compared to almost all other existing climbs. Adam Ondra laid rest to the grade speculation with his three-day repeat in 2011, stating it was 9b and highlighting, above all, the route’s indisputable beauty.

So this dream route has now been repeated by Seb Bouin who after a myriad of 9a and 9a+ becomes the second Frenchman to send 9b, after Fred Rouhling and his (unfortunately controversial) ascent of Akira twenty years ago.


14/04/2011 - Adam Ondra, the Chilam Balam interview
Interview with Adam Ondra after his repeat of Chilam Balam 9b, the route claimed by Barnabé Fernandez in 2003 at Villanueva del Rosario, Spain.