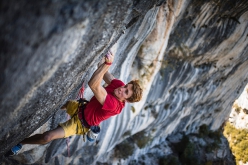 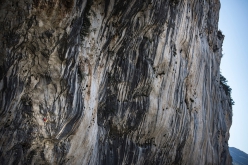 Gorges du Verdon: Sébastien Bouin climbing La cote d’usure 9a+ at La Ramirole. Right in the middle of the Verdon canyon, 150 meters above the river
Photo by Tilby Vattard 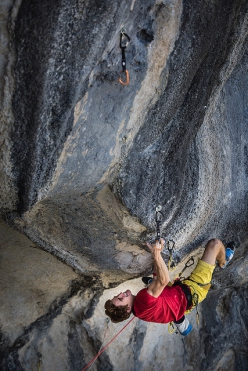 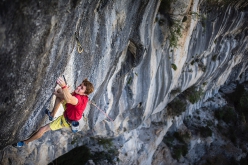 At the Gorges du Verdon in France Seb Bouin has made the first ascent of 'La cote d'usure', a 60-meter sport climb graded 9a+ bolted by the French climber nine years ago.

Last Saturday French climber Sébastien Bouin freed a project he had bolted nine years ago in France’s monumental Verdon Gorge. According to Bouin his La cote d'usure is an "absolute king line" through the ultra-overhanging Ramirole cave, a 60-meter test of supreme endurance which comes in the wake of the 9a+/9b he freed at Russan earlier this year.

"This project was really important to me for many reasons" explained Bouin. "First of all; the length of the route which is just exceptional. It is definitively the most incredible line I’ve bolted in my entire career. Right in the middle of the Verdon canyon, 150 meters above the river, this route is a concentration of pure moves, incredible holds and crazy bouldering sections. Little tip; this route is full of pinches (what a dream for me)."

After bolting the line, at times on his own and not without difficulty therefore, Bouin realised that the climb was too difficult. "I didn’t start climbing this route right away. Back then this challenge seemed way too hard. But a few years later I finally decided to get this project done and started with the first part. The goal was to figure out the first big dyno crux. In 2018 I decided to work the route even more seriously, because it’s a perfect complement to training. I still needed to clean and understand all the sequences of the second section. It’s been such a long and intense process but also so satisfying. It’s been a fantastic journey and a complete process, from bolting this beast nine years ago to its first ascent now."

30.10.2009
Charlotte Durif 8c+ climbing fest in France
In October Charlotte Durif from France carried out the first ascents of two 8c+, Pull Over at the Grotte de Galetas in Verdon and The Wall at Combe La Vielle.