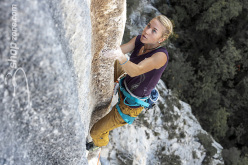 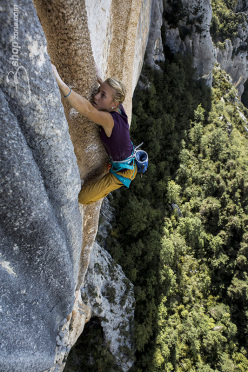 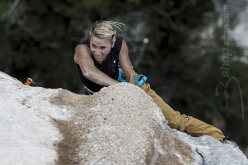 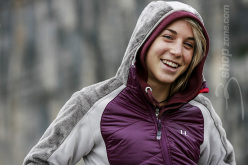 Two days to get to grips with her first 8b+. Intriguing. Add to this the fact that the 8b+ isn't exactly around the corner, but hundreds of kilometres from home and at a crag never seen before, then things become even more interesting. All the more so if we mention that that “crag” happens to be the Verdon Gorge, where absolute void reigns supreme, and that the 8b+ is called Tom et je ris, reputed to be one of the most beautiful sport climbs in the world. Final detail: to get to the start of this route you need to abseil down into the void and hope you'll find the right sequence back out again. That's a pretty big challenge by all accounts, one which Italian climber Federica Mingolla successfully mastered last week. The 20-year-old from Turin has been going from strength to strength recently and while she's a full-time Sports Science student, it's interesting to note that she's been climbing for only five years. Last May she redpointed her first 8b, Fuga dal Ghetto in Valle di Lanzo and this, her first 8b+, was redpointed last Thursday in the Verdon Gorge. She couldn't have chosen a better route, as Edoardo Falletta explains.

What is Tom et je ris? What does this evoke in climbers, with its name that sounds just like one of the world's most famous cartoons? Even if you're a strong climber there's no taking for granted that you'll succeed on this route, a line that is so obvious and clear that it can be seen with the naked eye in the middle of the grey Rive Gauche. Immaculate rock, a breathtaking drop, a tricky approach and a complicated abseil into the void to clip the quickdraws are the ingredients that make this 60m single pitch a priceless jewel wedged into the heart of the Verdon Gorge. As I said, big muscles and strong fingers certainly won't suffice to add your name to the list of the select few who have managed to climb these famous limestone tufas. What really counts here is dogged determination and a burning desire, two important pre-requisites needed before clipping into the static rope and rapping slowly down into the emptiness.

I've often asked myself whether it's really worth all the sacrifices we make, at the end of the day all we do is climb yellow and grey streaked limestone, weathered smooth by water and dry winds that spiral upwards from the Verdon river. But I've come to understand that, even if you've dirtied your hands only once with chalk and blood, then the answer is yes. It's always worth it, because every effort will eventually be rewarded with joy and immense satisfaction.

The following words don't want to tell the story of how you climb the pitch, nor is this a metre by metre account of its row of bolts. No, this is the story of a dream. The dream of a young woman who lives and studies in Turin. A young woman who despite her mere 20 years of age can teach, though her actions, a thing or two about determination to adults (or those who believe themselves such) and what it means to follow a dream and achieve a specific, personal goal.

Tom et je ris came into life thanks to the superb intuition of Bruno Clement who bolted the line in 2004 and dedicated it to his son who had just turned four. Chance and destiny needed another ten years to make Federica and Tom meet, after she had just been photographed for the front cover of a climbing magazine that ended up in her local climbing gym. The route's difficulty and beauty are what makes it one of the most fascinating in the entire Gorge and Federica was immediately hooked. After a quick search on the internet she realised that she wanted, more than anything else, to tackle this long journey. One which starts at a shallow niche, slap bang in the middle of the grey face, and leads up to the comfortable balcony exit and its lavender and thyme that grow in abundance on this plateau.

Federica immediately understood that those moves were perfectly suited to her style of climbing, that the extenuating vertical marathon wouldn't worry her in the slightest. Climbing 60 metres, fighting against the rising pump, using precise footwork is a style that Federica excels at and so half the battle was already won... all she needed to do was go there and do it!

We first began to talk seriously about this trip at the end of May, but what with competitions, university exams and the encroaching summer that renders the Verdon unbearably hot, we opted for September. Going to the Verdon for the first time is something truly magical, intensely exciting. Even in normal conditions, in controlled circumstances the Gorge's vastness and verticality don't leave room for mistakes, this is no place for hesitation or improvisation. Here you dance on rock hundreds of metres above the deck, a fall from one quickdraw down to the next is a much longer affair, far more worrying then elsewhere.

On the first day it rained incessantly but this didn't discourage her from locating the belay station from where one abseils off using the static line. Obviously the rock was completely wet and we too were soaked and freezing. We decided to return to La Palud, the tiny village we'd chose as our base camp. The next morning was damp and grey but nevertheless we decided to walk the path that, in a hour and twenty minutes, leads to the start.

The first go on Tom et je ris served to discover that the route starts slightly overhanging and that the climbing is by no means easy. After two go's to learn the intense sections by heart and figure out where to rest, Federica reached the belay. Nevertheless we decided to call it a day, it was late and even though she wanted to try from the start once more, after toproping the final moves we set off back home.

What happened on day three is a secret that only Federica knows and something she will certainly want to guard jealously in the depths of her heart. Her belayer, after a few quickdraws, lost sight of her and was alone in the immense void. Federica climbed, did what she knew best, one hold after the next, one pinch following the other. She climbed. Stopped to rest for five minutes, five minutes that were far too long. Those of us at the top counted them as they ticked by, slowly, our hearts skipping a beat. Her feet, bridged out smearing on the smooth rock and then, in what seemed like a century but actually turned out to be nothing more than a complete circle on the clock, Federica reared her head beneath the ledge.

She didn't talk, not a single breath, no scream. We knew it would be superfluous, totally unnecessary. Her eyes shone brightly. We looked in amazement, and in that instant I remember so clearly we looked at each other in silence, just a step away from the overhang. Happy for having put in the effort every morning on that damned approach path, happy for having carried those heavy rucksacks, filled to the brim with far too much gear, happy for having skipped lunches and wolfed down our dinners. Proud of being there. Proud of Federica. She deserved it.

A special thanks goes to Tommaso who, despite not being a climber, wasn't discouraged by the Verdon void and flew his drones above Federica's head to film these beautiful moments.
To Elio who with his experience made our stay on the Rive Gauche overhang safe, and who with his marvelous photos documented this great achievement.
To Andrea who with his immense kindness, helpfulness and friendliness belayed Federica when this really was (really... hey, come on) needed.
The final thanks goes to Federica Mingolla who with her energy is always a great inspiration for all of us who have the honour and privilege of knowing and calling our friend.

A further thanks goes to the sponsors whose fundamental support allowed Federica to experience this route ; Petzl, Wild Climb, Bshopzone, Ferrino, Avrio Drone
Furthermore, check out www.blogside.it for details about the approach.


Verdon Gorge rock climbing in France
A selection of rock climbs in the fantastic Verdon Gorge, France, an area which witnessed the entire evolution of sport climbing.