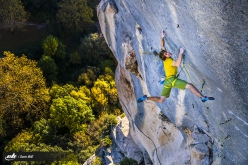 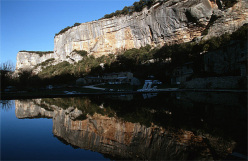 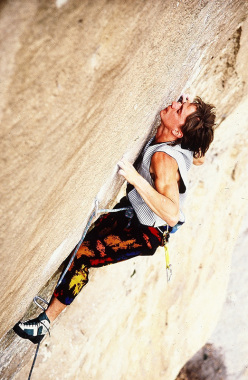 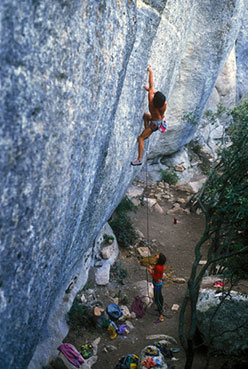 Laurence Jacob, belayed by Luisa Iovane, climbing Le nuit de lézard 8a+ at the Face Ouest at Buoux in 1986.
Photo by Heinz Mariacher

Is repeating an 8c still newsworthy? When with Adam Ondra’s Silence climbing grades have scratched the surface of 9c and the world’s first 8c was established over 30 years ago? Possibly yes, in particular when what Sébastien Bouin has just redpointed is an undisputed, rarely repeated benchmark for sports climbing.

The route in question is Agincourt, a ferocious 10-move sequence at the huge limestone outcrop Buoux nestled deep within the Provence freed in 1989 by young Englishman Ben Moon who, in doing so, provided France with its first 8c sports climb. At the time it was one of world’s first 8c’s, just two years earlier Germany’s Wolfgang Güllich had managed to break into this realm of difficulties with his Wallstreet in his home Frankenjura.

Obviously Agincourt, or Azincourt in French, left its mark, not only because of the controversial name that recalls the historic French military defeat, but also because back then the South of France in general and Buoux in particular were at the absolute forefront of this sport. French repeats didn’t take long, at the hands of Didier Raboutou, Marc le Menestrel and François Dreyfus. Other international stars were drawn to this route, too, such as Italy’s Alessandro Lamberti and Germany’s Stefan Glowacz, but in the early ’90's Buoux began to lose its charm and when the leading climbers turned their attention elsewhere, Agincourt fell into oblivion.

Agincourt in the new millennium is still one of the most difficult sports climbs at Buoux and is rarely repeated, not only because it is located on the upper section of the crag and therefore laborious to reach. The climber who recently decided to put in the extra effort to comprehend something about his country’s climbing history was Seb Bouin who, after his monstrous 60 meter 9a+ in the Verdon, has now tackled these 10 intense moves in the sector Les Dévers. He didn’t need too many attempts to grab the redpoint, obviously; even Ben Moon a year after his first ascent stated that Agincourt no longer represented the state of the art.

What is interesting though is Bouin’s revival of the past’s cutting edge. His quest is called Vintage Roc Tour and so far this had led him to repeat a handful of standard-bearing climbs, such as Super Plafond at the nearby crag Volx. This 8c+ was freed by Jean-Baptiste Tribout in 1994 and combines Terminator with Le Plafond. For those unfamiliar with Le Plafond: this roof also goes by the (once again provocative) name of Maginot Line and was France’s second 8c, first ascended back in 1989 by... yes, Ben Moon.

22.04.2010
Buoux Face Ouest reopens to climbing
After 25 years the climbing ban at Face Ouest at Buoux has now been lifted.
14.02.2001
New route at Buoux climbed by Cristian Brenna
In January Cristian Brenna visited Buoux and flashed 'Chouca' (8a+) and, in just two attempts, climbed ‘La rose et le vampire’ 8b and a new 8b+ by Antoine le Mènestrel