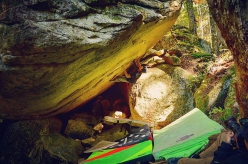 25-year-old boulderer Ryuichi Murai has made the first ascent of United, an 8C+ boulder problem at Mizugaki in Japan.

The sheer breadth of talent coming out of Japan in recent years is absolutely astounding, both for indoor competition climbing - where multiple athletes from the Land of the Rising Sun often qualify for Lead and Boulder finals - and on outdoor rock climbs.

Another from this seemingly endless pool of expertise is Ryuichi Murai, the 25-year-old who after sending a number of 8C’s has now stepped up his game and made the first ascent of United at Mt. Mizugaki in Yamanashi.

This is the low start to Decided, a block he freed in 2018 and graded 8B+. The five additional moves nudge difficulties up considerably, so much so that Murai has suggested 8C+. Should this be confirmed, it would make United only the second problem in Japan graded 8C+, after Nayuta at Gero freed in 2017 by tireless Dai Koyamada. And, at the same time, United checks in as one of the most difficult boulder problems in the world.

Currently this accolade goes to Burden of Dreams in Finland, the world’s first 9A freed by Nalle Hukkataival in 2016 and attempted this autumn by Toru Nakajima and Ryohei Kameyama. Yup, yet another two extremely strong Japanese climbers...

31.03.2018
Sachi Amma climbs Japan's first 9b
At Gozen Rock in Japan Sachi Amma has made the first ascent his Soul Mate. Graded 9b, this is now the country’s most difficult sport climb.