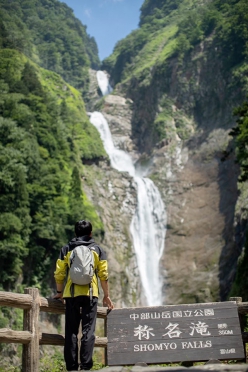 Toru Nakajima below the Shomyo Fall, the highest waterfall in Japan
Photo by archive Toru Nakajima

The video of Toru Nakajima making a free solo climb of Shomyo Fall, the highest waterfall in Japan. The discipline ascending streams to their source is called Sawanobori in Japanese

Sawanobori is a form of mountaineering in Japan that involves ascending mountain streams to their source. This implies exploring narrow gorges, crossing steep faces and, at times, even climbing next to or through waterfalls, battling against tons of water. While there are diverse criteria that measure the difficulty of a 沢登り, the main rule is: the climber ascends in the opposite direction to the waterflow.

One of the most expert at this form of canyoning in reverse is Toru Nakajima, the 25-year-old PhD student who 10 years ago made a name for himself when, at a mere 15 years of age, he travelled to Great Britain on his own and made an impressive number of cutting-edge ascents on England’s gritstone.

Nakajima subsequently got a taste for Sawanobori and in 2018 he teamed up with Yuji Hirayama, James Pearson and Matty Hong to climb the Shomyo Fall, at 340 meters in height and with 4 huge falls the highest waterfall in Japan. Nakajima’s thirst for adventure wasn’t quenched though and in summer 2019 he decided to climb the fall again, this time without a rope.

This form of mountaineering may seem absurd to some at first glance, but Pearson sheds some interesting perspective "At the end of the day it’s all climbing, they’re all walls, all vertical playgrounds to explore. And the more we can open our eyes to other people’s visions of the world, and not write them off as crazy or silly or strange, the more we can just decide to do things because they are fun and enjoyable, and the better it’s going to be for everybody."

For the record, a few months ago Nakajima travelled to Finland to try Burden of Dreams, the first and so far only boulder in the world graded 9A. The aim of the trip was to decipher all the individual moves, and in the few days available before having to return home he managed to climb every move.