► News ► Climbing ► Melloblocco is forever, 2017 to go ahead as usual
Versione italiana 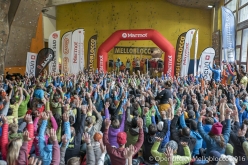 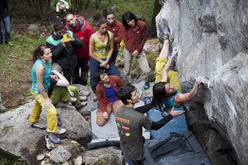 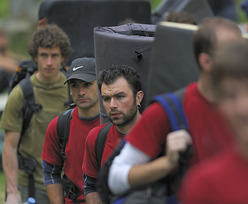 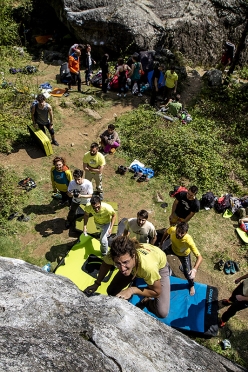 PORTFOLIO / gallery Portfolio: Melloblocco is forever, 2017 to go ahead as usual

Melloblocco is forever, 2017 to go ahead as usual

From Thursday 11 to Sunday 14 May 2017 Italy’s Val Masino - Val di Mello will host the 14th edition of Melloblocco, the world’s biggest international climbing and bouldering meeting. Just like every year the event will be organised by Associazione Operatori Val Masino.

Melloblocco No. 14 will take place as usual! The official announcement was made during a public meeting on Tuesday 31 January 2017 by ‘Associazione Operatori Val Masino’, the umbrella organisation that pools together various enterprises in Val Masino, Italy. During the meeting Sara Fiorelli was elected new president and replaces Giacomo Sertori. The world’s biggest and most famous climbing and bouldering meeting is scheduled to take place as usual therefore, and the 2017 dates are Friday 28 April to Monday 1 May. (*)

The event will be headed by Stefano Scetti and he will be assisted this year by the two long-term event directors, Michele Comi and Nicola Noè whose task will be to direct Melloblocco into a bright future. Naturally the organising committee includes Simone Pedeferri who, ever since the outset, has been in charge of the route setting teams. ERSAF (the regional forestry commission) will continue to provide its fundamental support and monitor the impact of the event on the surrounding territory.

The decision to go ahead with the event was awaited with baited breath by the entire climbing community, as well as Val Masino itself and the announcement ends a period of uncertainty. In the past weeks the Association - that has organised the event since 2010 - defined a new internal hierarchy and asked both the valley and the local administration for a clear signal regarding their commitment to the event. This was deemed fundamental for the future of Melloblocco which came to life for - and evolved for - the valley and its territory, for the area’s rich climbing history and for the local needs. With an eye towards a development, both economic and social, that is sustainable.

Melloblocco will go ahead as usual therefore, will be with us forever and the Mello story will continue to unfold. This is what many, many hoped for in recent days; a statement of affection and sense of belonging that came directly from the Valley as well as from many Italian and international climbers. This mobilisation, this grass-roots action fuelled not only the organiser's desire to continue, but also confirmed that the road embarked on all these years ago was the right one. A "model" and a direction that has always sought to include absolutely everyone, a sort of grass-roots movement (that many would define nowadays as "social" or 2.0), that anticipated the times.

Melloblocco has an important and also particular history. It’s a success story that witnessed, year in, year out, a totally original project grow from strength to strength as it focused on a valley, its beauty, the love for climbing and respect for nature. The meeting - which came to life in 2004 thanks to Lombardy mountain guides who, in 2006, handed the organisation to the Val Masino town council who in turn passed it on to the association in 2010 - has evolved into the biggest international bouldering and climbing meeting in the world. A true phenomenon that made Val Masino and Val di Mello known worldwide. Suffice to say that in 2016, for example, 2600 climbers registered for the event and more than 8000 guests stayed in the valley. This phenomenon will repeat itself from 28 April to 1 May 2017, of course up in Val Masino, Valtellina, Italy.