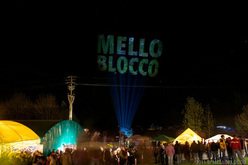 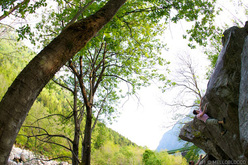 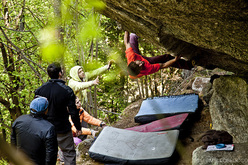 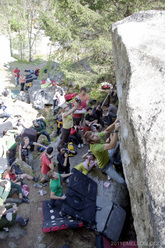 Melloblocco 2011 and the great bouldering tribe

Melloblocco, Val di Mello, the bouldering tribe and the biggest bouldering meeting in the world

I'm not going to search for words I can't find, to tell you old things in new clothes... This time (in the words of Italian singer Guccini) I'll not talk about Melloblocco #8 in the usual manner. I won't tell you how beautiful it was, even if it exceeded all expectations. And I won't tell you about that valley where waterfalls drop in curves. Nor will I mention its colours. Or the emerald green alpine meadows. And I won't mention the sun (splendid this year) which played its game of hide and seek through the Bagni di Masino forest. I don't want to talk about those marvellous rock faces stacked high, one on top of the other, as if created by some sort of visionary artist. Nor will I mention those innumerable boulders which seem to have fallen directly from the sky, or from the Precipizio degli Asteroidi, to make every boulderer happy.

And I really don't want to tell you how many Melloblockers turned up for the event. I myself found it hard to believe, so you don't stand a chance in hell. You'd find it impossible to understand that despite the crowd, all that you could ever hear was the breath of the valley. Although it seems impossible, it's true... yes, you simply wouldn't believe me. You'd think that as one gets older (me in particular) one gets a bit deafer. Anyway, I don't want to tell it all again. Why bother?... If you've never been to the valley before, well, it's your tough luck.

So this time I won't make you "shed a tear". As Stefano told me. He's one of the Holy Trinity organisers. The one with the woollen hat pulled down over his eyebrows, the one you never notice but, even if  the world is about to come to an end, he's always got an answer to your problem. So this time I'll tell you about the Melloblocco no holds barred. By browsing through the usual confused state of the morning-after.

I'll begin with the encounters. Because one of the things which always happens at Mello are encounters. Chance encounters with those you haven't seen in ages - ie once a year at the Melloblocco - or first time meetings. I might add that this is a sign of the times, but I'd risk being pathetic and you'd shed a tear. What is certain is that the young girl who pointed out that "smoking kills" got me thinking. At the time I was taken aback and didn't know what to reply... reason and innocence were on her side. So I asked her how old she was and if this was her first "Mello". Seven she replied, and this was her 6th Melloblocco. Just like mine (well, not the age)...

Perhaps that's why I seemed to only notice young and even younger climbers as I ambled through the Mello Village. Loads, loads of them. That's why, in an "inspired manner", I exclaimed to the other Mello holy trinity member: "you do realise that these youngsters are growing up with the Melloblocco. And that they'll remember it for as long as they live...?" The emphasis was wasted, the timing completely wrong. We had reached the Tarzan boulder which had been transformed into an interactive video game. And he (the one with the least hair) suddenly seemed rejuvenated, he'd transform back into a young boy. We were gob-smacked. Incredulous. It must have been 1am. The lights, sounds and music of the bouldering-video-game continued ceaselessly with real players. It was as if the day's bouldering in the valley simply hadn't sufficed. As if fingers, trashed to the bone by Val di Mello's legendary granite, had suddenly "come alive". Perhaps it's because Mello, because bouldering is an irresistible game. Or perhaps it's because they're young...

On the other hand, or rather, on the other side of the meadow, the dyno wall continued to be hotly contented. The very same leap which, just a few hours ago and slightly shorter, was used by the Mello baby. Those children had really made me smile, more than once. Perhaps I'm a sentimental type after all... A bit later on, at night, the same smile reappeared – a mix between the stupid and infinite - while I swayed uncoordinatedly to the beat of the African drums... those kids, those improvised dancers and percussionists, were untiring, too. Was this the dance of the Melloblocco tribe? Just a stone's throw away, in the tent, climbers continued to dance to a sort of "Balcanic" tune reminiscent of Kusturiza. While a bit further on, up the entire valley, the party continued in the hundreds of tents. A totalling bouldering party. Impressive... and, I admit, incredible.

So unbelievable that I don't want to tell you about the magical lights which appeared amongst the stars. I was hypnotised as I watched them appear. And I assure you I hadn't had anything strange - apart from something "refreshing" offered to me by that boulderer (word has it he's extremely strong) with red hair. Anyway, others next to me were taken in by the same spell. I've got my witnesses. Or rather, it was ththey em who told me the lights are called "Thailand's lanterns" and were launched in Valle di Mello. What a spectacle!

Perhaps you've already noticed, I've begun to lose the thread... But before signing off there is still so much more to say. Too much. I'd love to tell you about Adam Ondra for example. Of the roar of applause which accompanied the trailers of his film. Of how touched I was at seeing him talk with Stevie Haston, as if they'd been best friends forever. Who knows what they told each other... perhaps they talked about Hard Grit, a must-style of climbing regaining popularity amongst young climber, of which ever-green Stevie knows a thing or two. But I'd like to tell you what valley gatekeeper, mister Simone Pedeferri, told me about incredible "Adaminio": "I followed Adam today through the valley and got to know him better" said Pedeferri, adding "and you know what? Even if he only climbed 6a, I'd consider him a great person." Thankfully phenomena grow up... despite continuing to being stronger than any climber could have ever previoulsy imagined.

And then I'd also like to tell you about Chris Sharma. About how he risked ruining his wrist in signing the hundreds of posters. About his special rucksack he used in Val di Mello: it really did seem similar to a shopping bag. I've got a hunch that it's the latest trend, fashion designers take note. And I'd also like to mention Chris's titanic battle, along with Michele Caminati (hats off to the Tin Tin of bouldering) and Gabriele Moroni (him again) on "English dream", a problem which in the end remained unscathed. And I'd also like to touch on the incredible special bouldering session not only with Adam Ondra - Chris had set out to look for him and incredible Ondra seemed in 7th heaven - but also with Mauro Calibani who certainly didn't cut a bad figure, on the contrary. These moments amongst the world's top climbers were  beautiful. Just as the battles by more "mortal" climbers. Such as, to name one off the top of my head, the performance by Italian climber Riccardo Caprasecca who finished 2nd after having sent 4 problems. Joint equal with a certain James Pearson who appears to be - despite not having been recognised by many - one of Britain's absolute rock stars.

I've got plenty of other memory flashes. But it's clear that I've rambled for far too long... So I won't tell you about the look in the eyes of the Sicilian couple (from as far away as Catania I believe). I won't tell you about their pure joy after having made the effort to travel all the way to the Mello. Also because I started off by saying I didn't want you to shed a tear. Instead, I'd like to finish by telling you about a short escapade which I was almost forced to do by Michele (the valley mountain guide who completes the "Melloblocco trinity") and Nicola (that bloke with hair which come as an optional). These two finally made me get to know the valley from up high. They dragged me up a route. And so, up there between the fantastic rock faces, it was I who shed two tears. The first at the start of that unprotected slab: the old climbers who first ascended this route must have been mad. And the second when the time came to descend, because it was simply too beautiful, up there in the heart of the valley of wonders. But what's the point, I know you won't believe me. Even if this time I've given it my best shot. Your tough luck: you don't know what you're missing. At the next Mello, who knows perhaps... I'll give it another go.