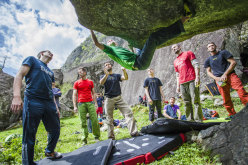 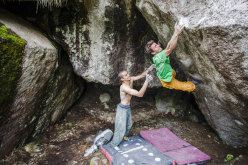 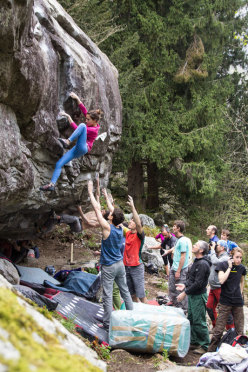 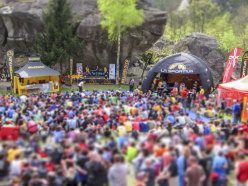 MELLOBLOCCO 2013
When: 26 April - 5 May 2013
Where: Val di Mello / Val Masino (Valtellina, Sondrio, Italy)
What: the world's biggest bouldering meeting
Who: for all those who love bouldering, from across the globe
What for: climb the numerous boulders and valley rock faces
Organisation: Associazione Operatori Val Masino

5/05/2013. The last day of the 10th Melloblocco. 10 days of climbing and bouldering to reaffirm the indissoluble bond between Val Masino - Val di Mello and the Melloblockers. All 2,000 climbers have promised to return next year.

Melloblocco bids farewell to Val Masino and Val di Mello, with that beaming smile which reveals something intense, strong and beautiful. 10 days, shared together, which won't be forgotten about in a hurry. This certainly holds true for the 2,000 climbers who registered and took part in the world's most important international climbing and bouldering meeting, and this certainly holds true for the valley itself. Because this edition which celebrated Melloblocco's 10th anniversary had to something special, and it really was. In every sense. It was a real journey, a joint adventure almost, highly desired and celebrated by all. A total experience that, day after day, one boulder problem after the next, overcame all difficulties, grew and confirmed its desire to be there, to count. And also be in charge of its own happiness.

From the long rainy start to the brilliant sunshine during these wonderful finishing days, once again the vertical community was united by the love for climbing and also for this special nature, for these mountains. And the Valley understood, responded and was there for all. Proof of this can be found in last night's great party. Never before had so many people come to celebrate. And never before had so many Melloblockers merged with all those who gathered from every corner of Valtellina. Of course, much of this was due to the engaging, joyful music provided by Circo Abusivo. And the fairy-tale starry night certainly helped. But also, and perhaps above all, it was due to the spirit of Melloblocco, fuelled by its immense love for climbing but also by the desire to hang out together, to meet up, share beauty, to be an integral part of it all.

Some endured the entire 10 days. Others came for the first weekend and then returned for the second. And some arrived for the final days and enjoyed all the sun (and perhaps because of this they can consider themselves the "luckiest"). But those who experienced the full Mello version have a twinkle in their eyes, a light in their hearts that is difficult to explain. Yes, you can almost recognise those who stayed put from day 1 to day 10. They have a rhythm and smiles that speak for themselves. They have something in their eyes that seems to say: we won this Mello, we made it ours, hour after hour, one problem after the next, with our climbing and everything we did beyond our climbing.

It's true, this Melloblocco is a bit theirs, it belongs to all these youngsters who dedicated their days to climbing and to the valley. Some are young, others absolute champions. For many it was the first time at Melloblocco. All together, from the start to the end, they built and defended their celebration which has transformed into a little "legend". They welcomed those who came for "Climbing without limits". More than 150 climbers and beginners, blind, visually impaired, disabled arrived on Friday 3 May to be a part of Melloblocco and to demonstrate how "A mountain enjoyed by all" is a real possibility. An initiative promoted by the Lombardy Region, CIP, FASI, ERSAF and club Arrampicabile e Vetta, that demonstrated true values, both sportsman and human, from the likes of Antonio Rossi (Olympic champion and Lombardy Councillor for Sport and Youth Policies) and Paraclimbing Champions Silvia Parente, Giulia Poggioli and Simone Salvagnin. As well as all those Melloblockers, champions and non champions alike who attended this event. It all occurred with a disarming simplicity and naturalness that seemed to go a step beyond simple solidarity.

The response to the initiative organised by Climb for Life and ADMO was just as surprising: yesterday these organisations were in the valley to raise awareness and inform about becoming bone marrow donors. The aim was to collect saliva samples from potential future donors: the result broke all records. Dozens and dozens of youngsters chose, consciously and with utmost conviction, to take this first step. This reply was truly unpredictable and also completely moving. A sign of maturity and commitment that speak for itself.

Talking about commitment: what remains to be mentioned are the results of valley climbing, on the new boulder problems that are at the heart of Melloblocco. As usual there were some great achievements. Everyone did their best, climbing whenever they wanted to (boulderers practically never stop climbing) up the thousands of valley boulders. And also on the competition problems. This was game and a pretext for a collective comparison in which many distinguished themselves.

Beginning with Barbara Zangerl who with 9 out of 10 problems was one of symbols of this edition (and not only because of her outstanding tops). Jenny Lavarda put in a great performance with 7 tops, proving that she is one of Italy's premier boulderers. Caroline Ciavaldini from France and Russia's Yulia Abramchuk sent 6 problems, while the other Frenchwoman, Anne Laure Chevrier, sent 5. Roberta Longo from Italy and France's Caroline Sinno sent 4.

Now, as the packed closing ceremony is about to come to an end in the Mountain Center garden, thanks must go to the Val Masino tourist board which organised the event, to ERSAF and all the companies that support it and to all those who made these days possible. From Stefano Scetti, Michele Comi and Nicola Noè who are the heart and soul of this meeting to the Lombardy Mountain Guides who, with great expertise took care of the technical aspects of the event, not to mention Simone Pedeferri and his team who, in this edition too, discovered, cleaned and set all the problems. But a big, warm embrace goes out to all Melloblockers (the real driving force behind all of this) and to the Valley itself. Their energy will remain and will continue to be felt. Like their goodbye, which is much more than just a simple promise.