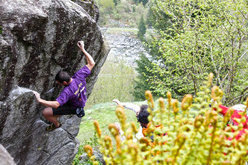 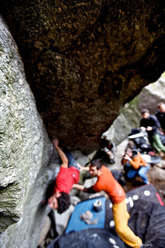 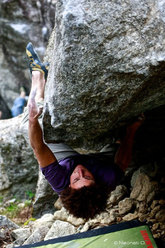 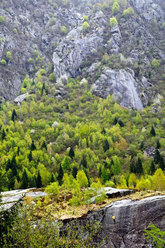 Melloblocco 2010 turned out to be a success once again. Despite the bad weather 1900 registered climbers took part in the world's largest bouldering meeting in Val di Mello, Italy from 6 - 9 May 2010. The valley was visited by a circa 3500 boulderers, as can be read in the report by Nicoletta Costi and Nicola Noè.

The cars made their way up the valley beneath a shower of rare intensity, turned off for San Martino past two rivers in Camel Trophy spate - the main road was still closed after a recent landslide - while at the registration stand a handful of climbers exchanged books. Perhaps we'd manage to climb a couple of problems beneath an umbrella instead of being engulfed in a cloud of chalk...

But the Melloblocco people were incredibly obstinate, the more it rained, the more climbers arrived. A river, just like the rain... Motley coloured, smiling, ready to have fun; alone, in pairs, with friends, dogs and families in tow, ready to enjoy themselves. The driving force behind this magic meeting is the involuntary but nevertheless palpable desire to share things: share the same passion for bouldering (and not only bouldering), share the game, the music, even the crash-pads... And then there was the treasure map, drawn to an art by Simone Pedeferri, which first outlined the region before focusing in on the new areas and the boulders with their invented, at times even improbable names.

The days spent bouldering were broken by seemingly never-ending events full of light, film screenings and parties. Some rushed to collect their notebooks, others searched for the partner with the same tombola number to win a free T-shirt, while sausages sizzled and people huddled around the embers to keep warm. And there was the light of a million colours, drums and music for (almost) everyone's taste - thank or blame the legendary art director Andrea Sciamano Barbieri for this. And the next morning the boulders lay in wait, ready to be discovered, attempted and, in the best of all possible worlds, sent!

A newspaper headline read as follows: "The Melloblocco tribe exceeds itself", while a girl interviewed for Italian mainstream television stated "when I come to the Melloblocco I feel like another person." A sponsor talked about a "Melloblocco style" to define an atmosphere which is both relaxed and lively... But let's have a look at some of anecdotes.

Adam is leaving for dinner, tired and certainly famished, when he's "blocked" by a horde of youngsters who conceal their shyness and with fake arrogance open their raincoats, tug at their Melloblocco T-shirts and give him a pen. He stops, understands, smiles and bows - wow - to sign one, two, three, all the T-shirts! He then disappears with the same discretion with which he arrived, while one of the kids comments loudly "Oh my God, I'm about to wet myself."

When called up onto the hay bale podium, the athletes partially reveal their character and awarness of being part of the "VIP" crew: some step up onto the bales and then step down again straight away, without giving the photographers the chance to take a photo, others more "expertly" lull on the podium, smile and give the photographers and crowd plenty of time. And then there are those who, in true Melloblocco tradition, find themselves topless and having to throw their T-shirts to the crowd.

Then there was an incredibly touching moment when Marco Ballerini greeted his friend and colleague Jacopo Merizzi who, still recovering from his serious accident, nevertheless wanted to attend the meeting in his Val di Mello. The ovation for Gabriele Moroni and his ascent of Action Direct was just as exciting: even the foreigners understood what was going on and joined in with the roaring applause.

And the children? The winners of the competition "Create a logo for the Val di Mello reserve" were announced on Thursday during the convention entitled "The Val di Mello Nature Reserve" promoted by the ERSAF and Legambiente. Friday morning kicked off with MelloBaby, a fun and formative event for which the sponsor had laid on mini-climbing shoes for all, while an exceptional father-photographer clicked away busily: Marco Scolaris, the president of the IFSC! Another detail: Maya is the youngest "princess" to register for the Melloblocco, circa seven months old with a smile from one cheek to the other: hard to beat! Congratulations to mum and dad.

In the evenings one screening followed the next in the main building Centro Polifunzionale della Montagna. Philippe Ribiere, the disabled French athlete and Melloblocco faithful, screened his "An Original Life" to a packed crowd before Iker and Eneko Pou gave their slideshow and talked about their adventures on the mountains of all seven continents. Chuck Fryberger's bouldering film Core was screened, too, with Michele Caminati, Kilian Fishhuber and Cody Roth and the fun curtain-call scenes of Pietro dal Prà and Cody Roth juggling the new climbing shoes. Then Nicolas Favresse from Belgium took to the stage to talk about his alpinism and his art. The geology exhibition "Stop romping up strangers" proved successful and the rocks and posters were a fitting backdrop to Pietro Pozza's magisterial lectures on geology and climbing.

The girls, more than anyone else, seemed "impermeable" to the adverse conditions (as usual...): compared to previous editions a record number of females registered for the event (474), totalling 25% - another record - of all registered participants (in the past this figure was around the 20% mark). This may also be thanks to the "abnormal" Melloblocco awards - the same for both men and women - while malignant voices whisper that this result is due to the face that the T-shirts are printed in both male and female sizes.

Absolute top athletes such as Abramchuk, Ernst, Graftiaux, Zangerl, Lavarda and the likes were spectacular - an inspirational display of strength, technique and grace for all those fortunate enough to witness them in action! This was one of those classic situations where, if you've never watched the superhuman efforts of more "humane" athletes, you'd feel like hopping onto the problem thinking "this'll be a breeze, I'll be up there in a second."
And then there was also Giovanna who fought hard to be the first up the boulder problem called Atlanticmello. As she climbed upwards she discovered, much to her horror, that the top was wet and in a fraction of a second she understood that a fall would result in injury. She grit her teeth and continued... FLASH! In her wake came the others, Abramchuk first: good one Giovanna. And thanks Melloblocco.

MELLOBLOCCO DETAILS, IN NO APPARENT ORDER... by Nicola Noè

Action Directe. 4 Melloblockers have repeated Action Directe: Iker Pou (ESP), Killian Fischhuber (AUT), Adam Ondra (CZE) and Gabriele Moroni (ITA)
Adam Ondra perfect timing. The judge noted that Adam Ondra sent White Stripe on Sunday at 14:59, 1 minute before the official end of the event...
Men and Women. Melloblocco is one of those rare events where the prize money is the same for both men and women and each category has 8 competition problems. These were technically perfect: both men and women managed to send 7 of the 8 problems. The following serves as a general indication (and can be extended to the easier problems, too): the men's competition boulders were climbed 95 times, the women's 63.
Long live women. Women were less worried about the poor weather than men. 2010 proved to be a record year, with 474 females. This equates to a 1:4 ratio - statistically speaking, events or competitions struggle to reach 1:5.
How many: 1900 registered participants and 3500 climbers in the valley.
Climbing World Cup: Three World Cup 2009 winners, Johanna Ernst (AUT), Adam Ondra (CZE) and Kilian Fischhuber (AUT), as well as the reigning Bouldering World Champion Yulia Abramchuk (RUS)
Mummy RAI. RAI 1, the Italian state television, aired a report during the prime time news at 20.00 on Sunday 9 May
We're all presidents. We were joined (as usual) by the President of the IFSC (International Federation Sport Climbing) Marco Scolaris as well as the Sport Director of the Italian Sport Climbing Federation Giampaolo Scialpi and Jerome Meyer, representative of the IFSC, winner of Boudlering World Cups and reigning European Champion (Paris 2008).
Dyno delights. The highly fought-over dyno competition on the artificial wall in the Sponsor Village proved an unimaginable success .
Alpinism evenings. Melloblocco wasn't all about bouldering, it included evening talks by the Pou brothers and Nicolas Favresse.
Baby Blues. Many members of the Italian youth competition squad took part in the Melloblocco.
Speed champion. In the form of Leonardo Gontero, Junior world Speed Champion (Valence 2009)
The official Melloblocco grades. Women: Unità light 7c, Il cielo è rotto 7b, Sound and vision 7a/b, Day-in day-out 7c, Senza compromessi 7b, Paranoid android 7b, Atlanticmello 6c, Tramonto occidentale 7b/+. Men: The best horror show 7c, Due cervelli una soluzione 8a, Lycans 8a/b (FA Simone Pedeferri), Rastabilimento 7c, Crazy snake 8b, Pinnajet 7b, White stripe 8a/b, La V 7c+.
Melloblocco beyond borders. 242 registered foreign climbers from 35 different countries. The most represented 41 French, 28 English, 26 Germans and 22 from Spain.
Melloblocco youngsters. The Melloblocco gets younger every year. More than 62% of the participants were younger than 30. 90% were younger than 40.
Valtellina. The valley replied with more than 130 climbers from Sondrio and the province.
by Nicola Noè