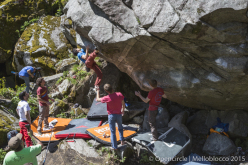 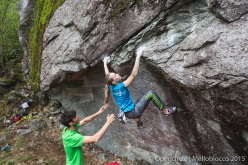 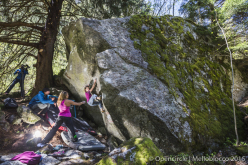 The 12th edition of Melloblocco drew to a close today in Val Masino and Val di Mello, Italy. This is the biggest climbing and bouldering meeting in the world and confirmation came from the 2,500 registered participants representing 25 nations, the 5,000+ climbers and also the unique nature of the event that unites their irrepressible love for climbing with the beauty of these valleys.

This morning they set off once again. In great numbers. All chasing those last problems. All absolutely indifferent to the weather that was, how should we put it… rather damp. Perhaps because for the Melloblockers this game, just like climbing itself, never ends? Or because the energy these girls and boys, men and women have seems unending? But there’s no point in asking more questions. What is certain is that after last night’s great party, after all the music and celebrations that continued well into the early hours of the day for a fair few, it seemed as if no one wanted to miss out on the Melloblocco 2015 grand finale. A final that encompassed all of Melloblocco, all that the 2500 Melloblockers (in truth more than 5000 climbers were up in the valley) gave and experienced during these four free, intense and definitely slightly crazy days. It goes without saying that this is the unique style of Melloblocco. The same style personated by the young, unique and unmistakable Mello ”tribe". As unique as these valleys and rocks in the large garden of Val Masino and beautiful Val di Mello.

Describing all the Mello boulder problems and the Melloblocker climbers that were seen is impossible. We would have to remember many, perhaps too many, details. And the overriding feeling is that much would be omitted. But we should mention, for example, all of last night’s special guests: Adam Ondra who, even on the stage, "hypnotized" the Melloblockers with his "Be the Change”; Steve House who introduced the audience to his mountaineering that goes well beyond the mere physical dimension; the ovation that was give to one of bouldering’s greats, Christian Core. But we should also mention the perfect climbing partnerships comprised of Simone Salvagnin and Urko Carmona Barandieran who showed everyone that they are not only great paraclimbing champions, but also great climbers. And we should also talk about the cheer that erupted when great Ramon Julian Puigblanque almost set a new fingerboard record. Talking of which, how should we describe the queues for the fingerboard test that continued even throughout the Circo Abusivo concert? These were (truly unique) Melloblocco moments, probably.

If those were unrepeatable, the bone marrow donation awareness campaign promoted by Climb For Life and Admo is certainly an event that can be repeated, especially since it takes place every year. One could say that this is at the heart of Melloblocco, but perhaps this might seem excessive. As it might seem excessive to state that Melloblockers share the same spirit. In truth it’s the many, diverse and absolutely free ways of interpreting Melloblocco that make it what it is. It’s a celebration and, at the same time, a place to reflect. A place to climb (a lot) but also to contemplate and "feel" the beauty of nature. A place to be experienced but that also needs to be safeguarded. It’s something physical, tangible, but also a place for the soul, to store and remember. Melloblocco is all and none of this at the very same time. Because there is nothing to understand here. There’s only - or at least it seems like this for many - the overriding desire to experience these days and these moments where there also “happens to be” a lot, actually loads of climbing.

Talking about the climbing, this morning the bouldering got underway again. In truth last night many extended this game far later than the canonical 18:00 with their "non-stop" bouldering sessions on the comp problems that held some surprises and fine “comebacks" in store. Adam Ondra topped out on 7 problems, just as many as Jacopo Larcher. Stefano Ghisolfi and Francesco Vettorata joined Gabriele Moroni with 8 tops. While one step away from the sweepstakes, with 9 tops, was Finland’s incredible Anthony Gullsten. In the women’s event it was the (very grand but very young) Slovenian Janja Garnbret who commanded the provisional ranking with 7 tops, followed by Katharina Saurwein with 6, Jenny Lavarda and Barbara Zangerl with 5 and Giada Zampa, Elena Chiappa and Kaddi Lehmann with 4. This was the situation before today’s rush finale. It’s clear that there some surprises were in the making…

At the end of the day, at 15:00 sharp, the battles and comebacks rewarded Stefano Ghisolfi, Adam Ondra and Martin Stranik who each sent 9 out of 10 problems to join Finland’s Anthony Gullsten. They were followed by Gabriele Moroni and Francesco Vettorata who sent 8, ahead of Jacopo Larcher (7), Nalle Hukkataival and Stefan Scarperi (6), Jorg Verhoeven and Vilimantas Petrasiunas (4). For the record, the unclimbed problem was "Mare Vostrum" as this had become even more difficult after the hold broke - which now means it’s a quality project for the future. In the women’s event this morning’s standings didn’t change: victory went to 16-year-old Slovenian Garnbret (7 tops out of 10), followed by Saurwein (6 tops), Lavarda and Zangerl (5 tops) and then Zampa, Chiappa and Lehmann (4 tops). It’s worth underlining the great climbs by Raffaella Cottalorda, Caroline Sinno, Michelle Theisen and Katerina Zimova who all sent 3 problems.

Then, when the last Melloblocker finally descended from the boulder problems, the moment came for the curtain to fall onto Mello 2015. The circle closed with the classic award’s ceremony. But also - and above all - with those farewells that represent promises that hold within them all those moments and experiences of this 12th edition. A goodbye to this “universal" valley and its beauty that many will treasure in their hearts until… the next Melloblocco.