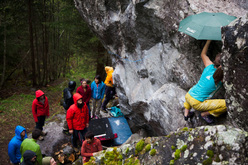 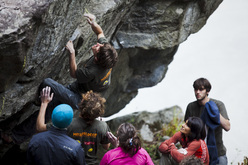 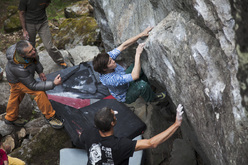 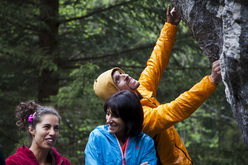 When: 3 - 6 May 2012
Where: Val di Mello / Val Masino (Valtellina, Sondrio, Italy)
What: the world's biggest bouldering meeting
Who: for all those who love bouldering, from across the globe
What for: climb the numerous boulders in the valley
Organisation: Associazione Operatori Val Masino

Sun, rain, boulder problems and parties for 2200 people during the ninth edition of Melloblocco 2012. Our final report of the world's most important bouldering meeting which took place in Val Masino - Val di Mello from 3 to 6 May.

"You see those patches of blue in the sky. It's the rain that goes, and the serene returns." Here we go again, Melloblocco has got the better of me once more. There I was, leaving the valley, when that old song by the Rokes (God bless Shel Shapiro!) entered my brain. And right then, at the edge of the road and next to the river, four diehards got ready to climb their small boulder problem. Back up there, in the crowded gym, people were still bidding their ritual farewells to the Melloblocco. Around me everything reminded me of the last two days of floods... And then blue dots began to make their appearance in the sky. While up above, the snow sparkled down onto legendary Val di Mello. When the game had practically come to an end the rain disappeared and out came the sun. We'd been cheated, surely... for want of a better definition. Nevertheless though, I still felt as if I'd just experienced a great Melloblocco, one of the best even. But why?

Maybe because it's all over, some will say. Or maybe because you're simply too old for all of this, is what my dear, cunnning friend would say. All holy truths. Just as true as the fact that Melloblocco this year was a battle. At times even painful. Yet, I repeat, it was beautiful. Intense, almost overwhelming, like never before. Perhaps it's because, luckily, hope is the last to die in the young. But it was touching to see them stay put, regardless of conditions. On Saturday for example, 1800 Melloblockers who had already enjoyed two days of brilliant sunshine were joined by another 300. On that day of "abandon all hope all ye who come to climb." Those who've been around for a while in this vertical world know full-well that climbers would often (indeed always according to those in the know) even sell their souls just to be able to lay their hands onto something climbable. The rule is: if it's raining there, go somewhere else. But this didn't happen at Melloblocco. Loads of climbers remained. Indeed, many arrived even on Sunday, when it was clear that this would be by far the wettest Melloblocco in history.

To find out why they did this you need to ask them in person. Perhaps some thought that the valley spirits wanted to put them to the test, possibly to fathom their love and strength. Whatever the reasons might be, the answer was there, loud and clear. Simone Pedeferri put it rightly: "these guys" said the valley goblin-cum-artist and incessant driving force behind the Melloblocco boulders "really put their hearts into it." A big heart and smile that no valley God can ignore, albeit if there is one. I'll put this by you: it was as if more than 2000 climbers, without consulting each other, decided that No, nothing would spoil their party. Nobody asked them but they resisted, invested all their energies, suffered even. Just think that a thousand plus climbers endured Saturday night's downpour in their tents. Yes, they're young and even younger still, but they'll have suffered all right. It was as if they all decided to defend Melloblocco. Saying "we're here to stay. And we want to have fun." Because, let it be clear once and for all, their happiness and partying was all that remained. And what a party it was!

At this point, seeing that I've talked so sweetly about it all, you might expect me to use the word epic. Or for me to talk about heroes. But rest assured, I won't push the boat out, this isn't the case here. Although I've always believed that heroes, real ones, need to be a tiny bit crazy, if not totally crazy, and this Melloblocco certainly had some truly mad moments. I'd define it as a little, healthy and supportive madness which enlightened everyone, from the biggest names in world climbing to the normal folk, including the organisers. How else might you explain how super star Adam Ondra, immediately upon arrival, shot off to climb strictly "in the rain", to cast his spell on a superb boulder problem. On the Beast. No clues given as to the name. How else could you explain the fact that he wasn't the only one to climb in these critical, if not impossible, conditions? And there must have been some good reasons for those rays of sunshine on Saturday which illuminated, between one shower and the next, the ascent of Barbara Zangerl. And on Sunday there was something uncanny, well beyond normal in Alexey Rubtso's competely soaked top. And it must have been a question of uniting heart and generosity which moved Ramon Julian Puigblanque and Sasha DiGiulian across the roof of the climbing gym. Everyone applauded as their waltzed across the horizontal. Yes, something must have happened.

What is certain is that we witnessed things which are difficult to put into words. As, for example, the muddy pool in which people danced the night away during Saturday's concert (talking of which, the group Vallanzaska were great!). And as, for example, the indoor bouldering session which took place at some late hour in the hall lobby between an unlikely liaison of climbers from Brescia and Rome. The aim was to traverse between two aretes. Add to this the fact that some of the strongest climbers in the world were enticed into taking part. Let me state that of these, it was unexpected party girl Sasha DiGiulian who distinguished herself. Leave the rest to your imagination. Who knows, perhaps you too can see that patches of blue high up in the sky, battled out from the heart, for the next Melloblocco, the big #10. "It's the rain that goes, and the serene returns."