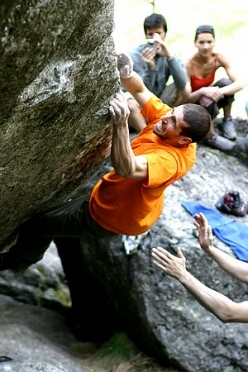 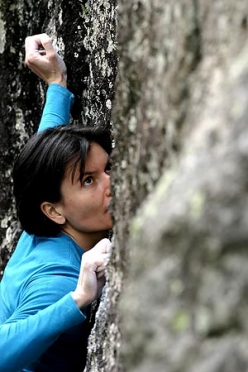 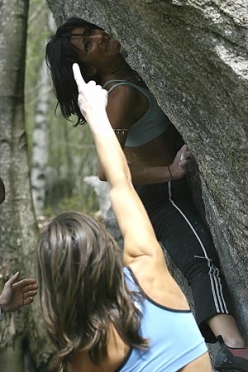 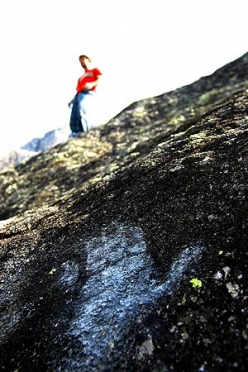 On Saturday 8 and Sunday 9 May, over 300 boulderers met up in the Italian Val di Mello and took part in the two-day international Bouldering event, organised by the Lombardy Mountain Guides.

It was probably the largest and most spectacular European climbing meetings ever! About 320 boulderers (top athletes as well as amateurs) responded to the call from the Lombardy Mountain Guides for the Melloblocco, the international (non-competitive) bouldering meeting in Val di Mello, a beautiful side valley to Val Masino, in the northern province of Sondrio. A small-large-colourful-smiling (and respectful!) “wild bunch” followed by about a hundred non-registered onlookers and climbers created a sort of Woodstock amongst the incredible boulders, green meadows and blue skies in one of the most beautiful valleys in the Alps.

Well what can I say? I've never seen so many boulderers grouped together in the space of just a few hundred square metres, enjoying such a merry atmosphere. And before providing a technical analysis, I'd like to point out that, during the two extremely crowded days very little rubbish was left behind and what remained was the result of forgetfulness rather than disrespect. I'd say that boulderers taught rock climbers, mountaineers and weekender tourists a lesson.

From a technical point of view I’d say that the new problems werequite simply perfect: Simone Pedeferri had ably foreseen which problems would be sent by many and which by only very few. The only unforeseeable element was how easily Chris Sharma would flash those problems the other top climbers either failed on completely or had to fight hard to send.

Some of top climbers weren’t on their best form (such as larger than life Toni Lamprecht), some felt ill at ease with the large crowds of spectators (Dave Graham above all), others were impressively strong (Mauro Calibani) or determined (read excellent Italiansports climber Cristian Brenna, now also a world-class boulderer). I particularly enjoyed watching clever and experienced Stefano Alippi, elegant and young Paolo Leoncini as well as the many other famous and nto-so-famous climbers who put on a fantastic show while attempting even the easiest problems. It was great to watch Francois Lombard - who had spent the whole winter skiing – have fun just like a beginner, topping 7B problems with his usual unequalled grace.

The ladies had a bit of a tougher time, led by top Italian boulderer Stefania De Grandi. Some scenes were definitely amusing: seeing the two of them climb together, I wondered how on earth Toni Lamprecht and Dave Graham can both excel in the very same sport - the former presumably weighs more than 80 kilos and his shoulders look like those of a heavyweight boxer; the latter might just as well be a marathon runner or a professional cyclist. Climbing really is different compared to all other sports.

For the Val di Mello the Melloblocco proved an unprecedented media success. David Graham said it was odd no one had ever told him about this area and he asked a surprised Simone Pedeferri about the routes up on the Qualido big wall; he also enquired about boulders that take almost two hours to reach. The French bunch asked for price of huts in the valley … The valley was at its very best, thanks also to the abundant spring snowfalls. François Lombard told me he hadn’t seen anything similar in Europe! It was awesome for him – devoted to so many different specialties – to find 400-metre-high routes, thousands of boulders, ice-climbing areas, single-pitch climbs of all difficulties and massive rock faces atan altitude of 3000 metres, all within a few minutes to 3-hours’ walk at most. It’s worth noting that Lombard lives in L’Argentière in France, where single-pitch crags and high-altitude routes abound.

Those who first came up with the idea of Melloblocco are surely enjoying some well-deserved satisfaction, those who selected and brushed the new problems can certainly be proud of their success. Above all though, it was a great victory for bouldering: it’s hard to turn your nose up at its greater meaning when you see dozens of youngsters gracefully and artfully pull off some extremely difficult moves. While it’s true that some moves belong to bouldering only, it is clear that there are problems and lines at crags and on multi-pitch routes that are consciously being ignored but which could already be climbed by many. Val Masino and Val di Mello host extreme lines of all shapes and sizes and 10a is only a matter of dedication…

PEDEFERRI AND THE NEW VAL DI MELLO BOULDER PROBLEMS
While cleaning the area used during the "Melloblocco" tother with my friends Christian Gianatti, Max Bosetti and Andrea Pavan I set more than 150 new problems from 4A to 8A+. These are as follows:
100 new boulders from 4a to 7a
15 new boulders froml 7b to 7b+
14 new boulders froml 7c al 7c+
5 new boulders from 8a to 8a+
more than 25 unclimbed problems
Furthermore: at Visido I climbed Tapioca 8a/band a new unnamed 8a; at Tarzan I sent the traverse Fuori dal tunnel 8a/8a+; at Remenno I extended Vega plus which is now 8b, and added an 8a, Viaggio in nessun luogo, to Sasso delle crepe.
Simone Pedeferri.

The official competition circuit was comprised of leven extremely difficult boulder problems. Those who managed to send the problems were:

Boulder F (Ul Mustru)
Not climbed by anyone

Boulder G (Il quadrifoglio)
Not climbed by anyone

Boulder H (El vuelo)
Not climbed by anyone