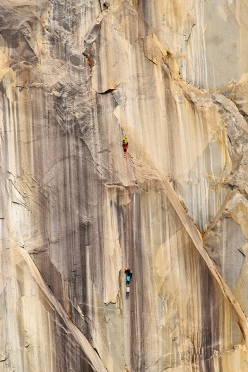 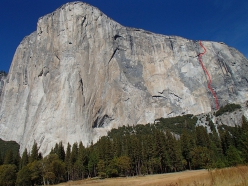 The line of Born Under A Bad Sign, El Capitan, Yosemite
Photo by Marek Raganowicz

Polish / British alpinist Marek Raganowicz reports about his 13 day solo ascent of Born Under a Bad Sign, a difficult and dangerous aid climb up El Capitan in Yosemite first ascended in 1979 by Bill Price and Tim Washick.

When I repeat somebody else’s route, I feel like I’m singing karaoke in the pub on a Saturday night. Fortunately, in climbing just like in karaoke, there’s space for some creativity, because nobody performs in the same way, so if on the one hand I feel like the first ascentionist, or like those who preceded me, on the other it’s always a step in my own direction, something I feel is somehow my own creation.

Anyway, I’ve just came back from Yosemite and another solo ascent on a modern A5 big wall climb on El Capitan – Born Under a Bad Sign. I picked the line from the guidebook mainly because of the area of the the wall, fantastic Devil’s Brow Roof, and the trip report written by Russ Walling and Walt Shipley.

I’d read their story of the second ascent just before I visited the Valley for my first time in 2006. At the time, I wanted to climb solo the Zodiac, and in my mind comparing BUBS with Zodiac was like thinking about free solo on Free Rider and ending up at the local climbing gym. Not quite true, but you get my point.

14 years later, I packed my gear for BUBS. To be honest I didn’t want to know too much about the route, so I didn’t do any further research before my ascent. I wanted to keep some unknowns and give myself a chance for creativity. Deep in my mind though I remembered Russ’s story, the initial inspiration and beauty of the line with only one short rivet ladder and challenging expando flakes.

The first A4 section proved surprisingly "easy" but as of pitch 7, ie above the Devil’s Tower, I need to keep my eyes and mind wide open and be far more creative than at Saturday’s karaoke. The pitches were difficult and I kept asking myself "who put up this damn hard line?". It was then that I realised I didn’t even know the names of the first ascentionists and so, when I go to the bivi spot, I checked.

On the topo I found two names: Bill Price and Tim Washick. Who are the guys? Although I failed to find much about Tim, in the Russ TR I discovered that Bill led the most of the hard pitches. In 1979 when the team put up BUBS and he was just 19th, he was considered one of the best free and aid climbers in the US, known for his hard 5.13b free climbing (Cosmic Debris), his second ascent of Sea of Dreams where he led all pitches, after he’d already established two other new lines on El Cap (Sunkist and South Seas). Down on El Cap Meadow someone told me that after his 21st birthday he gave up the climbing. I don’t know how many years he climbed in total, but for sure he’s a legend, on a par with the likes of Eric Kohl, Walt Shipley or other great guys from the New Wave that took place in Yosemite during the last decades of the 20th Century.

Born Under a Bad Sign finally received its second ascent after 7 years of attempts by top climbers of that time – Russ Walling, Walt Shipley, Paul Gagner, John Barbella, Rob Slater. My own ascent was probably the 7th and the second solo (the first having been carried out by Steve Gerberding).

If anybody asks me about the route, I’ll suggest don’t climb BUBS as your first route on El Cap, even you are the best karaoke singer in town. Take a lot of beaks, be creative, do not modify the features and enjoy the expanding flakes, loose rock, nice hooking and the rurp on the Devil’s Brow Roof. Good luck!