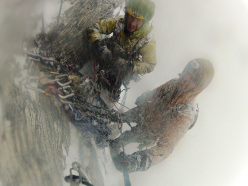 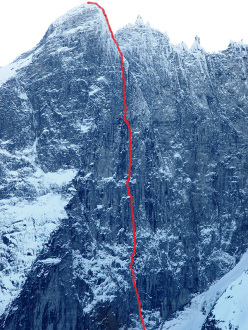 On 9/02/2015 Marek Raganowicz and Marcin Tomaszewski reached the summit of Trollveggen (Troll Wall) in Norway after having made the first ascent of Katharsis (1100m, A4/M7) up the inhospitable North Face.

Polish alpinists Marek Raganowicz and Marcin Tomaszewski have made the first ascent, in winter, of a difficult new route up the inhospitable North Face of the Trollveggen, also referred to as the Troll Wall in the Romsdal region of Norway. The new route was climbed between the 23rd of January and the 9th of February, including 2 rest days due to the hurricane Ole, and shares the first two pitches of the French Route, climbed in 1976 by Yves Boussard, Jerome Brunet, Patrick Cordier, Claude Deck and Jean Frehel, before forging a line between the Russian Route and Arch Wall, climbed in 1972 by the Brits Ed and Hugh Drummond. After reaching a huge ledge the Poles climbed an A4 crack that led to an upper ledge below the overhanging section, at the point where the Russian Route breaks out right and the French route on left. After breaching a series of roofs the Poles then joins the French Route at its pendulum and follows this up the ridge to the summit. The top was reached on the 9th of February and the following day was spent abseiling down the route which has been called Katharsis.

Raganowicz commented after the ascent "Climbing Troll wall in the team of two was a big challenge for us and we are happy that the conditions allowed us to do such beautiful, natural and logical line with no excessive drilling. Winter conditions made this climb very hard. Fast changes of temperatures made cracks filled by ice. On all A3/A4 sections the protection is rather weak."

It is worth underlining that the 1100m high Katharsis was climbed without the use of fixed ropes. It has been graded an impressive A4/M7 and its ascent comes in the wake of other outstanding big wall by the duo such as Bushido up the NE Face of Great Trango Tower in Pakistan's Karakorum in 2013 and Superbalance up Polar Sun Spire on Baffin Island in 2012.