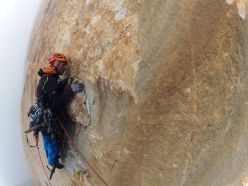 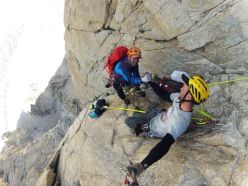 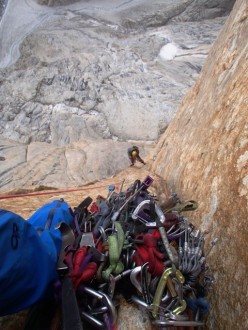 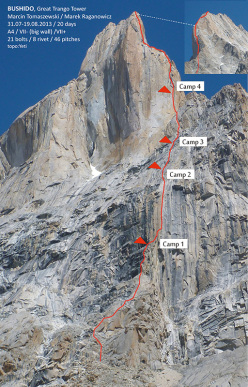 After last year's difficult Superbalance up Polar Sun Spire on Baffin Island, this summer Polish alpinists Marek Raganowicz and Marcin Tomaszewski made the first ascent of another big wall climb up an immense rock face, namely the NE Face of Great Trango Tower in Pakistan's Karakorum.

The new route put up by Raganowicz and Tomaszewski - Bushido - follows a line up the right-hand side of the face and at 3/4 height shares 3 pitches with Azeem Ridge, the famous route established in 2004 by the Americans Kelly Cordes and Josh Wharton. The Poles spent 20 days on the wall, established 4 portaledge camps and breached difficulties up to A4 VII+. 21 bolts were placed at the belays and only 8 rivets along the 46 pitches. Bushido doesn't reach the summit of Great Trango Tower but terminates at the top of the SW Ridge where Raganowicz and Tomaszewski were forced to retreat after being caught in a violent storm. The descent proved extreme, so much so that Raganowicz described it as follows "Raps down were one of the biggest challenges in our mountain careers."

Marek, tell us about the project

What about the line?
This is a different story. Originally we planned to climb more to the left on the Headwall section, but as with Superbalance we took the final decision when we were on the face. Choosing the line is a question that needs to be directed at the wall, we asked and we got the answer. In the end we got the line done, so perhaps we are good listeners.

And you succeeded
Of course success of a project depends on many things such as rock features, conditions, equipment, tactics, style and... intuition. Talking of which I'd like to underline something I feel is important: one of the reasons why I like to climb with Marcin is his incredible intuition, his innate ability for feeling and understanding the wall. We asked, the wall answered, to do that line and we heard it, listened and understood it...

20 days spent climbing on the wall and "listening". Was this planned and can you describe a typical day up there?
At the beginning of our project we planned to spend less then 20 days on the wall, but because Dave Allfrey dropped out we were no longer in a team of three and consequently required more time. If you will look at the expedition dates you can see clearly that it was super-busy trip. We had no rest days at BC, no acclimatisation ascents, we really had to squeeze our plan to make it happen. A typical day on the wall? Simple: we just climbed as much as we could. Our main rule is "climb every day and do your best".

Your route crosses some previous lines, for example it shares 3 pitches with Azeem Ridge, the SW Ridge put up by alpine-style by Cordes and Wharton. Did you add any gear to their bolt-free line?
On this wall it's really hard to put up some 100% independent because of the other existing routes and the configuration of the face. Above the Headwall section (on the ridge) we saw some bolts and we used some of them as belays, but climbed to the left of them on the top of the ridge. On the last steep section (pitches 38-40) there are beautiful cracks with belay bolts which we marked on our topo, but we didn’t place them, someone else did before us. While we climbed those pitches it was snowing and we failed to free climb some offwidth sections so I placed 2 rivets there to continue via aid (sorry!).

So in total you placed only 21 bolts + 8 rivets in 46 pitches. How dangerous would you rate the line? And can you compare it to other big walls, say in Yosemite?
Comparing Great Trango Tower and El Cap is a really risky game because of the so many differences. In Yosemite you can call YOSAR from the wall using a mobile phone and in minutes they'll arrive. In the Trango area you can call a military helicopter, but that will evacuate you from Base Camp only. Some rescue operations might be done by other expedition members, if they are competent enough and present at the BC.

A4 at 6000m. Tell us more.
I rated the technical difficulties on that pitch with no relation to the altitude, but to be honest the A4 section in at circa 5300m (on the pitch leading to Camp 4). The begining of the pitch is a combination of some rivets and hooks and then aiding on many weak beaks on bad rock. If you fall you could hit the slabs at the bottom of the pitch. So it's pretty serious.

Your route doesn't reach the true summit. How far was this and how long do you estimate it would have taken?
Initially we wanted to take on the challenge and climb the ridge to the main summit of Great Trango Tower, but reality soon checked our dreams. Summit day was the worst day on the route: windy snowstorm and frozen gear slowed us down and in the middle of the night we decided to finish at the point marked on our topo. Marcin was at the highest point of the last pitch when I called him back. It was a very cold night and we definitely didn't have a chance of climbing to the main summit, but we are nevertheless happy with what was possible and with what we achieved. We rapelled back down to the portaledge after 24 hours of constant climbing. As a team, if you combine our trips to Polar Sun Spire and Great Trango Tower we have spent over 50 days on a big wall but that was the only night that we just lay there, in our sleeping bags, without having the energy to cook something to drink or eat.

Then came what you describe as your most difficult descent ever as you were hit by a storm. Did this surprise you or did you know it was coming and you took your chances?
The storm hit us completely by surprise. The morning was cold and foggy, but OK nevertheless. But that afternoon and the night were really bad, I should say horrible... Ironically, the day before we had our only rest day during the entire expedition and the weather was good. And it turned beautiful again after our final day. As I said before, climbing is always a game comprised of many factors and we need to respect nature and what she gives us.

So how would you rate this compared to your other ascents?
Of course we compared Bushido with Superbalance and... at the time it was hard to envisage doing anything harder than Superbalance. On Polar Sun spire we had true winter conditions so that makes a huge difference. That was adventure of the lifetime, but of course, we are still playing this game you never know what's going to happen next!

The two of you form a formidable team. What do you think makes you so strong? And what can you tell us about your personal Bushido - your ethics and code of conduct?
In a climbing life, throughout the years everybody goes through different periods. Marcin and I come from a different generations but our experience provides unique mutual understanding. The key factor is that we found a golden balance between us and we do not want to waste it. The power comes from the same understanding of the mountains, from sharing the same climbing values and ethics, from how we have built and continue to build on our climbing partnership. This is the source of our energy and power.