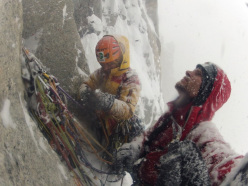 Bad conditions are not a sufficient excuse. We resolved to climb every day...Racking up before pitch 27
Photo by Marek Raganowicz 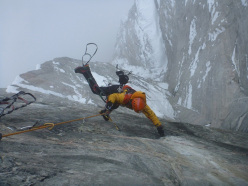 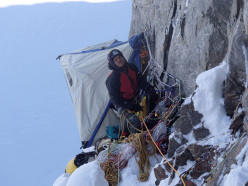 Interview with Polish climber Marek Raganowicz who in April and May 2012 established a new big wall climb, Superbalance (VII, A4, M7+) up Polar Sun Spire on Baffin Island together with Marcin Tomaszewski.

A precarious balance. An exceptional battle between the elements, between the power of nature on Baffin Island, the largest island in Canada. But also an exceptional peace, inner as well as between the two members of the expedition. All of this and more is shared by the extremely talented, 50-year old Polish alpinist who established an immense new route up Polar Sun Spire in 24 days this spring along with 37-year-old Marcin Tomaszewski. Their Superbalance distinguishes itself thanks to the purity of the line and the overall difficulty of the experience.

Let's start from the beginning. Why this mountain? And was this your first experience on Baffin Island?
For me this was my first trip to this dream land, while a few summers ago Martin established a new route nearby on Mt Thor. Why this mountain? Well Polar Sun Spire is the largest wall on Baffin Island, so what choice did we have? Anything else would have been a form of escape from Polar Sun Spire and our dreams. So we decided to deal with this challenge straight on.

The route seems to follow an obvious line.
Yes, as soon as we started to analyse pictures of the mountain we clearly identified this weakness as a possible line for new route. Of course we didn't know for certain how things would turn out, so this explains why we took all the equipment for some hard nailing. When we finally arrived at the base of the wall we were immensely happy to see that the Boomerang - as we called the obvious curved line of weakness - was in relatively good condition. We didn't waste time: the next day morning we started our climb and we reached the top 24 days later.

24 days + 1 for the descent, of intense cold.. during which you navigated your way up M7 and A4!
During most days the temps were down to around minus 20°C. These rose a little during the last week and we even enjoyed some hot temperatures at around -5°C ;-) As regards to the difficulties, it's hard to compare winter free grades with aiding, but in these conditions they were both were pretty hard. I did the A4 and Marcin led the M7+ pitch... After this experience, I've certainly got the greatest respect for Marcin's climbing technique, ability and toughness.

You had to resort to some drilling. What criteria do you use?
Obviously there is no objective criteria and in some respects I used my experience gained from 6 years of big walling in Yosemite. The Polar Sun Spire wall is pretty blank in sections and thanks to Mark Synnott we were prepared for some thin nailing and some drilling. Our goal though was to establish a line which was as natural as possible and in retrospect I think hand-drilled bolts at the belays to back up the poor rock and the 15 rivets in the 1700m long route aren't too much really! We drilled 2 to join features on blank sections at the beginning of the A4 pitch, while the other 13 were used to bypass rotten rock on pitches 16 and 28. Believe me, we really did our best to avoid drilling as much as possible and we're really proud with the result.

So tell us about the rock quality
Well in the Boomerang the rock was terrible and I think only the cold enabled us to climb this section in relative safety. All in all we cut through 5 ropes in various places, so this is very significant as to the rock quality on the lower section. Thankfully this improved above Camp III

Talking of Camps... Camp 2 looks pretty awful. Tell us your bivies
We had a portaledge, so our main concern was to to find snow for cooking meals at the bivies, but in the end we always came across good places to establish our Camps and so this didn't prove a problem. Generally speaking, being in such a close and small space for 22 nights is a very hard test for climbers, but we definitely passed that exam ;-) We had to share all daily duties like cooking, recharging batteries, repairing gear. We had no problems at all with this, there was a mutual understanding, no words were needed. For our next climb though we'll need a new portaledge as that one we used was too old and too small. What's more, it was hit by falling stones and after the climb we had to throw the flysheet away.

You were in a team of two... how alone and exposed did you feel?
At the beginning of the project we looked for a third team member, but when we eventually gave up it was like an illumination. We realised that with a team of two this would be a real challenge and this is exactly what we wanted; in a split second we were overcome by spontaneous enthusiasm and shook hands saying “Yeah, we're gonna do it!” Much later though, up high on the wall, we had to work extremely hard at keeping each other motivated every day. A single mistake could have dashed our hopes and dreams so we were extremely careful and, at the same time, crazy enough to finish the route. I think the source of our understanding stems from the fact that we're both soloists. We look at things from the same angle, from the same point of view. It was so surprising how calm we were on the wall and how, in the end, everything went so smoothly.

The cold, the difficulties... troute seems a very Polish undertaking...
Voytek Kurtyka once said that climbing is an art of suffering. We talked about this quote on the wall said “Yeah, if that's true, as of today we're like Leonardo Da Vinci and Michelangelo ;-)”
Joking aside, yes, some Polish climbers are really tough and we just try to follow their example. For us, all those who climb in the Himalayas in winter are at the top of the league. It's true, there are so many names of tough guys like Kurtyka, Kukuczka, Rutkiewicz, Wielicki, Piotrowski, Hajzer, Golab, Piecuch, Fluder... Having said that, I'd don't think this is necessarily a quality which is found in Poland only. On the wall we were reminded about climbers such as Walter Bonatti, Renato Casarotto, Silvia Vidal, Simone Moro and Denis Urubko. And we have a huge respect for soloists who have climbed on Baffin Island, in Patagonia and other remote areas, specifically for Mike Libecki, Charlie Porter, Jim Beyer and Dave Turner. They all represent the Polish school ;-)

What do you look for in your first ascents?
It's hard to defend the view that establishing new routes is like an art, but it is definitely an act of creation and we expressed ourselves in that manner. On Polar Sun Spire we were constantly balanced on the edge, we had the unstoppable impression that something special was happening every day. Yes, establishing new routes is a unique form of creation.

Last question: on Superbalance, did you create the climb of your lifetime?
It was our first climb as a team, so while we were on the wall we kept talking about our previous experiences. Both of agreed this was the hardest climb of our lives. I think each of us has climbed some harder grades, but the wall, conditions, style and overall difficulties were exceptional. Two people, in that particular environment, fuelled by obsession, that wall above... we truly believe we discovered an exceptional balance between all the elements, between ourselves and also within ourselves. A special kind of peace. This is why we called the line Superbalance.

Superbalance is part of 4 Elements, a project which aims to establish new routes across the globe and also to help children with cancer via the charity Fundacja Spelnionych Marzen. For further information check out this link.