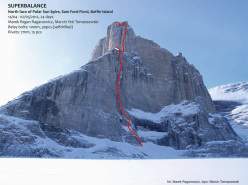 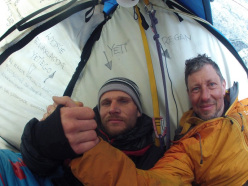 A route to be remembered, forged in true Polish style, up the inhospitable Polar Sun Spire in the remote Sam Ford Fiord area on Baffin Island. This is what Marek "Regan" Raganowicz and Marcin "Yeti" Tomaszewski returned home with after having established, from 14 April to 7 May, their Superbalance, a circa 1500m high big wall with difficulties which touch on M7+ ice, VII rock and even A4 aid.

After having reached the base of the mountain with skidoos, the two operated in complete solitude for 24 days up what they believed as being the "most natural line on the wall", located between the only other two routes on this face, namely the 1996 American route (The Great and Secret Show, VII, 5.11, A4, WI4, Jeff Chapman, Warren Hollinger, Mark Synnott) and the 2000 Norwegian route (Bjarte Bo, Halvor Hagen, Torkel Roisli, Odd-Roar Wiik, VII, 5.10, A4).

Raganowicz and Tomaszewski established four camps and, apart from the technical difficulties, had to battle hard against the intense cold which dropped down to -20°C. All things considered though, the cold proved as much an ally as a foe: some sections of loose rock remained "frozen" in place and were therefore climbable only during this time of year.

"Climbing on the north face of Polar Sun Spire in the team of two, was a big challenge for us" explained Raganowicz, adding "we are happy that the conditions allowed us to do such beautiful, natural and logic line with no excessive aiding and drilling."

The Poles reached the summit on 7 May in poor conditions and immediately descended to Base Camp, which they reached on 8 May. Rations ran out the next day and the two shared food offered to them by local hunters... talk about perfect timing!

Further information will follow shortly about this ascent which is reminiscent, in terms of commitment, suffering and all-round difficulties, of undertakings of past times. Yes exactly, Polish style!