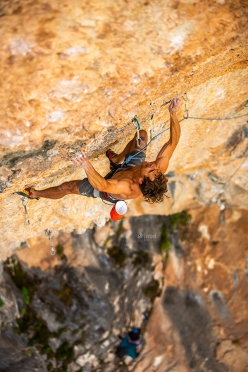 Jonathan Siegrist climbing La planta de shiva, the 9b at Villanueva del Rosario in Spain freed by Adam Ondra and repeated so far by only Jakob Schubert and Angela Eiter.
Photo by Javi Pec

US sport climber Jonathan Siegrist has climbed La planta de Shiva at Villanueva del Rosario, the 9b freed by Adam Ondra and repeated so far by only Jakob Schubert and Angela Eiter.

A year after sending his first 9b, Jumbo Love at Clark Mountain, American climber Jonathan Siegrist has now climbed his second route of this grade, La planta de Shiva at Villanueva del Rosario in Spain. First ascended in 2011 by Adam Ondra and repeated by Jakob Schubert in 2016 and - famously - Angela Eiter in 2017 when she became the first woman in the world to climb 9b, La planta de Shiva is a huge stamina test thought the widely overhanging limestone cave in southern Andalusia.

Siegrist first started working the line roughly about three weeks ago and came up trumps after what he described as "an absolute battle to the death". Asked why this route, Siegrist told planetmountain.com "I picked this route because I read in interviews with Adam, Jakob and Angela that this was one of the most insane resistance routes anywhere, and love challenges like this. And also because it’s so beautiful, in a new place for me that I’ve been wanting to explore for years."

The hardest part about climbing at your limit is balancing the emotions of wanting something with such overwhelming intensity and also somehow finding the strength to let it go and be free from the pressure. I found some kind of middle path today on ‘La Planta de Shiva’ 9b. It was an absolute battle to the death and I will never forget it. Thank you so much to @dustygene @neelyquinn @seth_lytton @escharas21 (@shainasavoy from afar!) and the amazing people here in Andalucia for the support and the laughs and the motivation! As with every emotional send, I leave a piece of my heart at the chains!! Photograph from the incredibly talented @javipec Venga! Onward! @arcteryx @lasportivana @metoliusclimbing #maximropes @climbonproducts @vertical.life.climbing

26.04.2011
Adam Ondra, 9b incredible fight and fun
Last Friday at Villanueva del Rosario, Spain, Adam Ondra made the first ascent of La planta de shiva 9b. A day later at Achidona he climbed three 8c's in a single day.