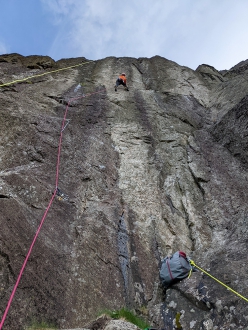 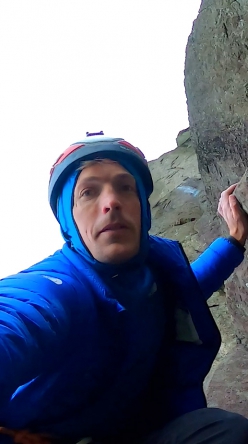 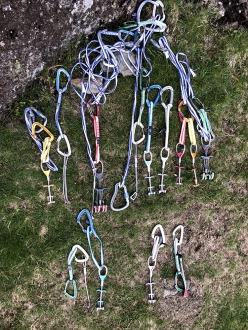 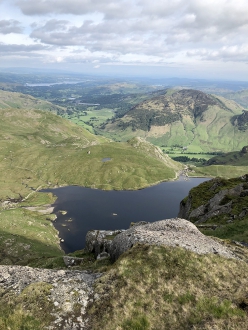 The view from Lexicon at Pavey Ark in the Lake District, England
Photo by James Pearson archive

British rock climber James Pearson has made a swift repeat of Lexicon, the E11 at Pavey Ark first ascended by Neil Gresham in 2021. After making a bold 'flash' attempt, Pearson worked the route ground-up before repeating one of Britain’s hardest trad climbs in cold, wet conditions.

Lexicon in the news once agin, this time thanks to expat James Pearson who a fortnight ago, making the most of a short and somewhat wet trip to the Lake District, managed to climb Neil Gresham's E11 masterpiece at Pavey Ark on just his third day of effort. While the fourth repeat after Steve McClure, Dave MacLeod and Mathew Wright of one of Britain's hardest trad climbs in less then a year may at first glance seem not particularly newsworthy, it's worth taking a closer look at - and celebrating - Pearson's fine achievement.

Pearson is one of the very few climbers persistently exploring the limits of hard trad and over the last decade he has been splitting his time between establishing vanguard new routes such as The Groove at Cratcliffe Tor and Le Voyage at Annot, and repeating standout lines put up by others such as Charlie Woodburn's Harder, Faster at Black Rocks and Jacopo Larcher's Tribe at Cadarese. What is striking about his repeats is not only the speed with which he often makes the tick, but also his efforts to climb the lines in fine style. This often equates into attempting to onsight the route (as he did with several E8’s, including what he considers his proudest onsight to date, Neil Gresham's Airdrawn Dagger) and also, seeing that anything E9 or harder "is still pretty cutting-edge in hard trad climbing" (cit. Dave MacLeod 2022), trying to flash or ground up the route.

Flashing a climb is one of those grey areas that encompasses many different tactics and, depending on who is asked, may or may not involve prior abseil inspection to check out the gear, touching the holds, watching videos, getting all the beta about the moves from others before and often even during the attempt etc. While there are evidently many nuances, it all boils down to not trying the moves previously and, equally importantly, being honest about the chosen approach so that others can gauge the ascent and possibly improve upon it in the future.

Pearson's 2011 flash attempt of Muy Caliente at Pembroke in Wales was the first time anyone had ever dared to try to flash E10, and while his impressive try ultimately ended in failure, it hinted at what might be possible by combining solid sport fitness and boulder strength with a wealth of bold trad experience. Not content, Pearson achieved Britain's first-ever E9 flash ascent three years later by powering up Something's Burning at Pembroke

A fortnight ago he attempted Lexicon. After abseiling down the route to touch the holds and check the nest of gear at half-height, he set off on his attempt which went "pretty well" but ended with a fairly long fall from about halfway up the headwall, just before the true crux. At this point, in keeping with his aim of improving style, he opted against trying the moves on toprope but instead he worked his way upwards, ground-up so to speak, from the good gear in the break, taking another longer fall in the process, topping out on his 3rd attempt.

The good news was that he had unlocked all the sequences, the bad news was that he had done so from half-height and would therefore need to return and start from the bottom for the full tick. Bad weather rolled in for a few days however, and with it huge seepage streaks that plummeted down the lower wall of the line; although Pearson was resigned to returning home to France without the route in the bag, he made one last-ditch attempt two days later. Belayed by his wife Caroline Ciavaldini he somehow skirted the wet sections and powered his way up in cold conditions, placing all the gear on lead, using the sequence first discovered by Neil Gresham and avoiding the additional poor gear found by Dave MacLeod, to claim the fifth ascent.

So what's the end result? Lexicon ground-up, after 3 days of effort, and after a bold flash attempt? ln some respects definitions like these depend on how you view things, as Pearson is the first to point out. And while there is clearly scope for improvement in the future, what the 37-year-old achieved should not be underestimated. It takes a rare combination of physical fitness and mental fortitude to even consider a feat of this sort, and currently there are very few climbers capable of operating at this level. Pearson is one of these.

23.05.2022
Mathew Wright deciphers Lake District's E11 Lexicon
Interview with Mathew Wright after the 23-year-old British rock climber made the fourth ascent of Lexicon, the E11 at Pavey Ark in the Lake District first ascended by Neil Gresham in summer 2021.

03.05.2017
Trad climbing: James Pearson takes on the difficult Le Voyage at Annot
At Annot in France James Pearson has made the first ascent of Le Voyage, a trad climb graded E10 7a that might well be one of the hardest single pitch pure trad routes in the country.