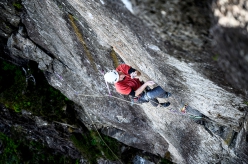 Mathew Wright repeating Lexicon, E11 7a at Pavey Ark in the Lake District, England, 19/05/2022. 'It provides 8b+ climbing (5.14), with a very serious fall from the crux right at the top of the crag. The gear is just past half height so falling on the last few moves of the crux is absolutely not recommended!'
Photo by Marc Langley 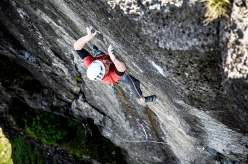 Mathew Wright repeating Lexicon, E11 7a at Pavey Ark in the Lake District, England, 19/05/2022. 'My gut feeling was that it would be an immense challenge and I felt utterly intimidated by the huge 25-30m fall from the crux.'
Photo by Marc Langley 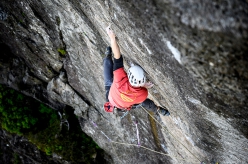 Interview with Mathew Wright after the 23-year-old British rock climber made the fourth ascent of Lexicon, the E11 at Pavey Ark in the Lake District first ascended by Neil Gresham in summer 2021.

On 19 May 23-year-old Mathew Wright repeated Lexicon at Pavey Ark in the Lake District. First ascended by Neil Gresham in summer 2021, the slightly overhanging line was graded E11 7a and, as such, is one of the hardest trad climbs in the country. It has been repeated by Steve McClure and Dave MacLeod who both have a fine trad climbing background, unlike Wright who has quickly and convincingly made his way up through the grades. Here's how.

Tell us about Lexicon
Lexicon is a route that takes no prisoners; the reputation that it gained loured me in and I wanted to see what it was all about. I have always really looked up to Neil Gresham and since he spoke so highly of this route, I knew that I would have to one day try it. Having recently moved to the Lake District, I knew that I had to go for it!

First impressions?
During my first abseil of the line, my initial reaction was "This is not safe!", the route is capped by an impossible, featureless headwall with the smallest of holds, made up of micro crimps and shallow pockets with no gear worth placing. My gut feeling was that it would be an immense challenge and I felt utterly intimidated by the huge 25-30m fall from the crux. This fall would likely result in a deck out from the top of the crag which is around 30m in length.

How did you go about working it?
I spent around 6 sessions in total trying Lexicon, 5 of which were toprope sessions, and on the 6th session I cleanly lead the route on my first headpoint.

You've sport climbed up to 8c+, possibly even 9a, with your repeat of Hubble at Raven Tor in 2020. Tell us about your trad background
Trad is the full experience for me, it encompasses all of the fantastic points which make climbing great for me. The exposure, the complexities and the beauty, all rolled into one great experience. I climbed my first proper E8 in March, then my first E9 in April, Achemine at Dumbarton Rock in Scotland. And now Lexicon, which is harder and considerably more dangerous. Both routes mean a lot due to the fact that it’s all very new to me and I felt like the experience was totally raw and driven by the right motivations.

Ritual question: gear on lead?
Yes, I placed all of the gear on lead for both Achemine and Lexicon. Ethics and honesty are essential in our great sport. I personally don’t believe that pre-placed gear should be allowed on trad ascents. I know of many people who pre-place sky hooks on trad routes and I personally don’t believe that this should be allowed.

How close to your limit was this?
I believe that Lexicon was the perfect level for me. It was hard enough for me to have to be perfectly focused, I could do it almost every time on a toprope and it was simply a matter of keeping my head together on the lead.

Easier said than done!
It provides 8b+ climbing (5.14), with a very serious fall from the crux right at the top of the crag. The gear is just past half height so falling on the last few moves of the crux is absolutely not recommended! So you need to be able to reliably climb 8b+ and be certain that you wouldn’t fall from the crux. This is made more challenging by the insecure climbing and small feet on the final crux section.

Final thoughts?
Huge respect to Neil for putting up such a great line aged 50! Lexicon's a perfect route!