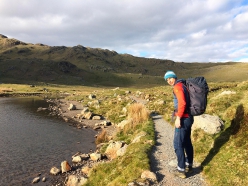 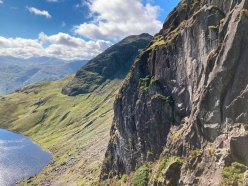 British rock climber Neil Gresham has made the first ascent of Lexicon at Pavey Ark in England. Graded E11 7a, it checks in as one of the hardest trad climbs in Great Britain.

For almost three decades Neil Gresham has been at the forefront of the British climbing scene and now the 50-year-old has taken his trad climbing into a completely different realm with the first ascent of Lexicon, a desperate E11 7a trad climb at Pavey Ark in the Lake District, England. After an independent start the route crosses the classic E8 Impact Day, before launching up the technical and bold upper headwall as reported on ukclimbing. The route offers the equivalent of 8b+ sport climbing, except that it is protected by good but small gear; dropping the final moves would result in a fall that comes worryingly close to the ground.

Gresham first tired the line last spring, working the moves on toprope before opting to concentrate his efforts on what would later become Final Score E10 7a at nearby Iron Crag. After specific training he returned this summer and, deciding to make the most of good conditions, went for the first free ascent before having toproped the entire line clean.

Speaking to planetmountain, he reasoned “I decided it would be a a waste of skin, energy and psyche. I had all the relevant sections dialled and had done various links but it made sense to go for the lead when cons were good rather than waste the opportunity with a clean toprope ascent. I also think that I climb better this way in terms of motivation. Sometimes if it’s very hard and you toprope it clean then it can make things worse as it’s still going to be very hard to lead it”

Should the grade be confirmed, that would put Lexicon on a par with Dave MacLeod’s Rhapsody at Dumbarton Rock which, although physically harder, has less worrying falls. Only one other trad climb is potentially harder still, Echo Wall high up on Ben Nevis and at present unrepeated since its first ascent by Dave Macleod in 2009.

Gresham has previously climbed two E10’s, the aforementioned Final Score in 2020 and Equilibrium in 2002. A true all-rounder, he has continuously been performing at the highest of standards in almost all facets of this sport, from trad climbing to sports climbing, Scottish winter climbing, drytooling and deep water soloing.

01.08.2008
Dave Macleod frees Echo Wall, Ben Nevis
On 28/07/2008 Dave Macleod made the first ascent of his project on Echo Wall, Scotland, his hardest lead to date.
12.04.2006
Dave MacLeod frees Rhapsody E11 7a at Dumbarton Rock in Scotland
Scottish Dave MacLeod has climbed the direct finish to Requiem at Dumbarton Rock, Scotland, calling the climb Rhapsody and grading the route E11 7a. This makes it a strong contender for one of the hardest trad pitches in the world.
17.12.2002
Neil Gresham repeats Equilibrium E10 7a
Last week the British climber Neil Gresham made an impressive second ascent of Neil Bentley's gritstone Equilibrium, E10 7a.
24.01.2001
Neil Gresham climbs 'The Tempest' M9 in Scotland
Neil Gresham makes the first ascent of 'The Tempest' M9 at Stob coire nan Lochan, Glencoe