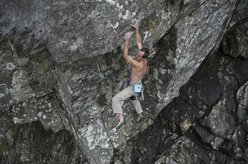 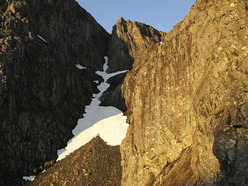 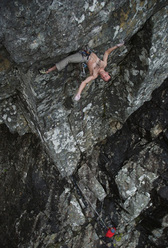 9 out of 10 climbers make the same mistakes

Navigation through the maze of advice for the self-coached climber.

Dave Macleod analyses his ascent of Echo Wall on Ben Nevis. Climbed in July 2008, this terrifying route represented a new level of trad climbing for the 29 year old Scottish climber.

At nine pm on the 28th of July 2008, Scottish climber Dave Macleod embarked on the lead of his life: Echo Wall. Located high on Ben Nevis, in the months prior to the ascent the 70m route route taxed Macleod like none other amd was eventually climbed "in a dream state of confident execution" after months of intense physical and psychological preparation.

The importance of this climb cannot be underestimated for not only did Echo Wall represent the culmination of years of climbing, it also heralded a new level of trad climbing from the man who has tested his mettle on some of the hardest outings in the Kingdom.

Now that the dust has settled, Macleod offers this interesting analysis of his gripping past, untangling the thoughts and motivation which led to one of Britain's finest trad outings.


Echo Wall by Dave Macleod
In 2006 I was on the lookout for a project that would keep me working hard on my climbing, not so much something to tick right now, more like another horizon to keep me working hard on my climbing. The crucial ingredient being that I didn’t know if I could do it or not. I found a huge arête high on Ben Nevis – a 70 metre pitch of 8c with very little protection generally and an almost unprotected section at the end of the crux.

As my climbing has progressed over fifteen years, I’ve looked more and more for these kinds of projects. As I’ve opted to attempt new routes that have taken me longer and a deeper effort each time, a strange feeling emerged I did not expect.

I felt that people are only limited by deciding what they really want to do, not whether they can do it or not. It’s as simple as that. It’s great that a sport can teach such a powerful lesson. There’s no doubt that this realisation changed my climbing life entirely. It gave me a lot more confidence in myself to take steps forward in my sport. It would be nice to say it had the same effect for things outside of climbing. But it hasn’t really worked out that way. Climbing is quite yielding to a stubborn and determined approach. It’s one thing I seem to be good at. The rock stays the same, you get more stubborn, you work out the route in the end. It’s been extraordinarily satisfying for me to play out this process over and over on successive routes that were way too hard for me when I first came to them. Apply this approach to things outside climbing, and things don’t always flow as you like!

So for sure I think that hard rock climbing and especially opening hard new routes is a a very satisfying pastime for the doggedly determined. When you link ten moves together where before you couldn’t do a single one, that is a good feeling. I don’t think I will ever tire of that feeling.

Like many young climbers, I used to think that topping out was my goal - completing the route. It took some really hard routes for me like Rhapsody and Ring of Steall to realise that while I was battling with them, I was right on top of my goal. The progress, move, by move, session by session was the fun part. Topping out was superficially nice, but also an empty moment - the end of the line until another inspirational piece of rock could be found.

Most of the time, I never consciously think about all this - I just go climbing and enjoy the act of it. It’s so simple and so brilliantly satisfying. But underneath, the need for hard projects like Echo Wall is there.

So with each climb I was doing in 2007 and early 2008, Echo Wall was in my mind. I was preparing for it, physically and although I didn’t always think about it consciously, mentally as well. I opened a really hard new winter route also on Ben Nevis - Don’t Die of Ignorance (Scottish XI). After so much waiting for the right conditions and trying to learn so much from precious little time on the chances it did give me, I learned a lot about the patience required for opening hard new mountain routes in Scotland. I often hear climbers talking about the difficult weather we have here, and giving it as a reason to stick to ‘safer’ sunny places elsewhere. Sure that's fine if you feel life is too short not to climb another strip of bolted limestone. But if there are no barriers, no tests of your will that are more difficult to control, is it really hard? The physical act of climbing is pure pleasure - it’s a basic need for climbers. But you can still have that in other places while you prepare for a mountain route. But the fact you have to perform on the day the mountain gives you is a layer of expertise that offers another slice of reward.

Echo Wall was going to be a risky climb. 8c or maybe into 8c+ where a fall from the crux has a low probability of survival. So I thought a lot about why I wanted to go for the climb. It wasn’t that I doubted whether I really did - it was obvious to me that the risk was part of the attraction in climbing. But I had never been really clear why.

I tried things like soloing some sport routes. I soloed a little 8b+ in Spain called Darwin Dixit, and did a really scary mountain 8a with some wet holds and a really technical slopey crux that was basically a solo (To Hell and Back E10). From these climbs I understood better that the risk brought a new life to all the other enjoyable aspects of climbing; movement, planning, teamwork etc…

The real consequences made the experience more real. Climbing where your life depends on what happens in the next seconds felt quite a lot more engaging than looking for the next bolt. You are never giving, and taking more from the experience of climbing than when you really must get that next hold. I could never do this type of climbing all the time. It would be utterly draining. The carefree days of sport climbing and bouldering are also one of my big reasons to go climbing. But neither could I always be carefree and never really put myself on the line. I need both.

Every one of the 40 or so days I walked up and down Ben Nevis to work on Echo Wall in the summer of 2008, I asked myself what I should be thinking on the day I could barely imagine - standing at the foot of the line, tied into lead ropes. I resolved that everything about this line, The mountain I loved to climb on so much, the quality of the rock and the moves, the difficulty of the route and the opportunity of expressing my best abilities by opening this special new route. How could I risk passing up this opportunity? I felt that if I was in good shape, and could put myself there on a day of perfect conditions. The bigger risk would be not to climb.

And so, when the day came around, I climbed, and it was perfect.

I was so lucky to find such a great outlet for my energy. It was really worth looking and looking to find it. When the right conditions are set up like this, so much flows from the connection of energy and inspiration. Even after the route, the experience kept producing new pleasures in making our film of the preparation and ascent with my wife Claire. Watching Claire push herself hard to make the filming of this possible helped me to raise my effort too. I hope we are able to find something like this again.

It was interesting to see how others reacted to the route in the UK after I had done it. Mostly people were interested in the significance of the route - to find the correct pigeon hole for it. Is it E11? Is it the hardest trad route in the world? Did you nearly die on it? The best I could offer to answer all of these questions was ‘possibly’ or at best ‘probably’. In fact, to offer any answer at all felt uncomfortable for me because weak comparisons between routes that could be a little bit hard or a little bit easier could not be further from my reasons for climbing it. How many trad routes are there in the world with 8c or harder climbing in a situation where falling will be fatal and situated on a mountain with few days of good conditions? As far as I know, Echo Wall is the only one? But is this important? The level of commitment required was very high.

I watched the way this and other hard routes around the world were discussed on and offline, and I could see that very quickly, the grade of the route would become the centre of the discussion, rather than the effort, the inspiration and the story of the ascent. The story of this ascent started in 2006 and ended with a snatched day of perfect weather just when I was ready to the lead. I used two mediums to share the story, my blog, and later our film. Both helped me to actually climb Echo Wall, and also understand better why I wanted to. In both my objective was to share the questions that remained unanswered right to the last moment. Was I willing to risk my life to climb this piece of rock? Would I have done enough preparation? Were my preparation climbs well chosen? What would I do if I decided I couldn’t do it or justify the risk after trying it so much? These were the important questions.

One by one I answered them until the moment I was standing at the foot of the route tied to the lead ropes. To be here and truly ready to climb such a hard and dangerous route, there must be no questions left. The only thing left is 70 metres of moves to be executed without hesitation, doubt or fear. To have a moment like this in your life is so much more important than the number attached to the climb.

Every time I pass Echo Wall (I am on Ben Nevis often - there are many other projects) I will smile and admire the line which is a great piece of rock. But it’s importance for me was purely while I was trying it, and that is over now. The lingering gift from this route was the knowledge that such improbable elements can suddenly fall into place when you decide to keep going even when it would be a lot easier to ‘be realistic’.