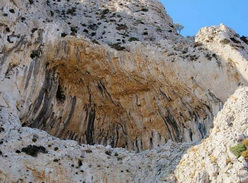 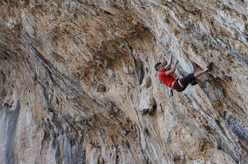 Kalymnos new climbs at the E.T. Cave by Neil Gresham

British climber Neil Gresham has established a series of difficult new routes at the E.T. Cave on Kalymnos, Greece.

In April 2010 Frenchman Claude Idoux developed ET, a new crag on the east coast of the island of Kalymnos close to Vathy characterised by breathtaking surroundings, numerous easy routes and a massive, obvious cave on the right-hand side. It was only a matter of time before someone would have added new routes here and British climber Neil Gresham took drill to hand to create, unsurprisingly, a handful of fantastic, albeit difficult new routes.

In an interview on climbkalymnos.com Gresham commented "This is another first class sector for Kaly (if I may say so!) The nice thing about it is that it’s away from all the crowds, around the less popular side of the island (near to the port of Vathy). The cave is in the shade all day and can be reached after a 20 – 25 minute walk. All the routes are in the F8s apart from one and the style is mega-steep tufa and pocket-pulling."