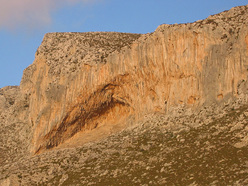 Climbing at Kalymnos... a sea of rock
Photo by Marco Bortoli 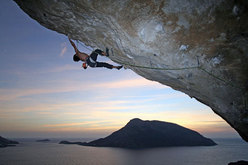 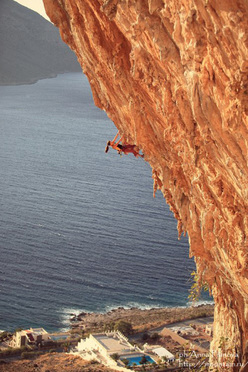 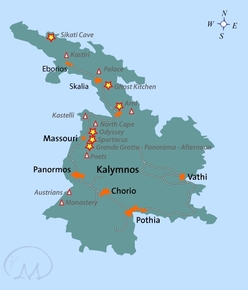 The crags on the island of Kalymnos.
Photo by Planetmountain

Rock climbing on Kalymnos in Greece is simply a dream come true! Awesome limestone crags, stunning routes, a relaxed holiday atmosphere, the warm Aegean sea to dip into after a hard day on the rocks, legendary Greek hospitality and cuisine...

Climbing on Kalymnos began as late as 1997, when the Italian Andrea di Bari established the first routes after having discovered the potential (still largely untouched) a year previously. Up until then the rocky outcrops were held in low esteem by the island inhabitants, who describe the present climbing boom of the island as follows: "When God made the earth he threw only rocks in the direction of Kalymnos. It is difficult to believe that what we previously considered a curse could become a blessing..." The local population quickly geared its tourist activities around the climber's needs and in high season the small village of Masouri on the western shores literally transforms into an international climbing mecca.

The current guidebook by Aris Theodoropoulos lists over 1700 routes, the majority of which are in the mid-grade range (400+ are graded in the 6a - 6c region) although some cutting edge lines now wind their way through the immense overhangs. Arhi, Grande Grotta, Odyssey, Spartacus, Panorama... these are all outstanding 5 star sectors that render the sports climbing on this island unique.

Getting there
Kalymnos is reached by boat from the island Kos. Take a charter plane to Kos, then catch a taxi to the port at Mastichari and then tge next boat to Kalymnos. Mastichari is 10 minutes by taxi from Kos airport and the taxi ride costs ?12 - ?15 in total. Regular ferries and smaller speed boats make the Mastichari - Pothia (Kalymnos) route regularly. The ferry ride takes approximately 45 minutes and costs euro 4; the speedboat takes approximately 25 minutes and costs euro 6.00. There are several connections between Kos and Kalymnos every day, year-round. In fact, many people from Kalymnos work on Kos, and they make the commute daily. When you arrive at Pothia (the main port in Kalymnos) you will find a number of taxis waiting. A taxi ride to Massouri costs between euro 10-15, depending on the number of passengers and luggage. Alternatively, you can rent a scooter or car, or inquire about the public bus schedule departing in front of the City Hall. There is a tourist information kiosk at the exit from the port. To check the Kos - Kalymnos ferry timetable, go to www.danae.gr and enter 'Mastichari' and 'Kalymnos' in the respective fields. You can also call the Port Authority of Kos for an automated timetable message in English on the following number: +30 22420 26594. In the unlikely event that there is no taxi waiting at Pothia, call the taxi station on the following number: +30 22430 50300.

The Kalymnos airport opened in 2006. Olympic Air flies Athens - Kalymnos regularly and a return ticket costs approximately euro 200. The problem with the Kalymnos airport is that it is small; its runway can only accommodate smaller prop aircraft, and if the weather is bad or windy the Athens - Kalymnos flight is cancelled. The much bigger airport of Kos is able to accommodate larger aircraft in all weather conditions, so to be sure many travelers just book for Kos. Unfortunately there is no way of knowing beforehand if your flight to Kalymnos will be cancelled, as the decision is made on the same day. What to do if you arrive at the Athens airport and find out your flight to Kalymnos has been cancelled? Run over to the Olympic Air ticketing desk and ask to get on the next flight to Kos. If the ticket to Kos is more expensive, you will be asked to pay the difference.

Best time of year
Climbing is possible all year round, though due to its southern location just off the Turkish coast the summer months tend to be hot. The famous Meltemi wind offers welcome relief in summer. Mid-season is highly recommend (September, October, April, May).

Rock
Limestone, in all shapes, colours and sizes. Spectacular tufas require plenty of stamina to get you through the overhangs.

Nowadays it's almost impossible that climbers haven't heard of this rocky island immersed in the Aegean sea, cooled by it's light breeze and surrounded by a splendid sea...
Since 1999 Kalymnos has become an important destination for those in search of peace, tranquillity and climbing. New routes multiply from one year to the next and, given the new route potential, the island will continue to be developed for years to come. It's because of this that the new guidebook replaces the old one, published just 3 years ago but already obsolete!
The new guidebook has been compliled once again by Aris Theodoropoulos. Unsurprisingly it's a mine of information about the sponge diver's island and contains all the latest additions: 64 sectors and 1700 routes (of which over 400 around the 6a mark making Kalymnos a paradise for mid-grade climbers).
The guidebook is bilingual (English-Greek) and is easy to understand with plenty of obvious symbols and photos. Every crag has a brief description, access info, orientation, climbing style, first ascent info etc. Photo topos have been used which render things even clearer, and each route has a star rating and a brief description.
At the back of the guidebook there is a alphabetically-listed route check-box - for those all-important holiday ticks! Excellent.