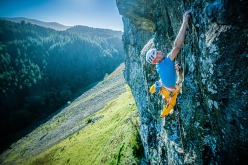 Neil Gresham, one of Britain’s premier all round climbers, has made the first ascent of Final Score, an E10 7a trad climb at Iron Crag in the Lake District, England. The new route provides both a direct start and a direct finish to the notorious testpiece If-6-Was-9, an E9 7a climbed in 1992 by local Dave Birkett. While the direct start had been climbed previously by Craig Matheson, the direct finish was added by Gresham in June via an easier approach in preparation for what he has described as being "the obvious challenge."

"The resulting route throws everything at you from safe boulder cruxes to atrociously protected boulder cruxes, to forearm-bursting endurance sections and monster runouts." explained Gresham, who feels Final Score is probably the hardest route he has ever climbed. This is no mean feat, seeing that his other hard trad ascents include the 3rd ascent of Johnny Dawes’ The Indian Face E9 6c in 1995 and the second ascent in 2002 of Neil Bentley’s Equilibrium, at E10 7a still one of the hardest routes on grit and in the country.

E10 7a slots in at the apex of British trad climbing, coupling technically difficult moves on extremely runout terrain. Gresham’s approach to bold trad has mutated over time and after his ascent he described his attitude as follows "As a father of two, hard trad feels very different to me these days and I'm happy to say that I climbed through the serious sections with composure and control. That said, the last part of the headwall, where you're looking at a 'safe 60-footer', was one of the biggest fights of my life and I can't believe how close I came to taking the ride."

Gresham has been at the forefront of the British climbing scene for over two decades, performing at the highest of standards in trad climbing, sports climbing, Scottish winter climbing, drytooling and deep water soloing.

Today I made the first ascent of a trad route in the Lake District which I’ve been trying it sporadically for the last 3 years. I think it might just be the hardest route I’ve ever climbed and I’m currently drinking champagne (or is is Prosecco, I don’t know or care). I’ll tell you more about it soon. Thanks so much to @anna_taylor_98 Ade Nelhams for support. @lasportivauk @lasportivagram @petzl_official @ospreyeurope